About to watch Firefly for the first time...

You know what they say about payback...

So as you can see by the title, I just ordered the DVD set and am about to watch Firefly for the first time. I'm really excited because from what I've heard so far, people seem to like it.
Without giving any spoilers could you tell me whether you think it's good or not, who are your favourite characters, what are your favourite episodes and what I should look out for etc.
Also can you tell me if there are any good Firefly podcasts that I can listen to after I finish each episode!
😀😀
Thank youuu x

(I'll probably post something once I've finished and maybe give some sort of review on the series!)

Black Thorn
I watched the first four episodes a few years ago but wasn't personally a huge fan and I never finished it. Without any spoilers, one of my issues was the giant cast; four episodes in, and I still only knew half the names of the main characters. But people had said it wasn't like Whedon's other shows, which I love, so maybe that should've been a giveaway lol

Hope you love it, though

Wesxfred
Thanks for the heads up about the character names 😄!

Think you'll like it. Most seem to. Let us know what you think.

It's been awhile since I've seen it...I do recall liking the episode Ariel (more cyberpunk than space western in this case), and also the one where the scammer meets her match (can't recall the name of that ep), which I suppose means I like the twists and turns story wise. I liked all the characters somewhat, though I'm one of the few merely lukewarm to the crazy sister (though some scenes with her are brilliant). I guess I relate to Zoe they most, but that doesn't necessarily make her my favorite character. (I'll save the rest, including quibbles that irritated me, for another time.)

Beyond that...when you watch the movie, be sure you can see the deleted scenes, which should not have been deleted and help it make a lot more sense (and one made me laugh and gave it more of a sense of closure to me).


And say when you're done, I'll try to look up the interesting fan theory that this show is the same universe (just the future) as Buffy & Angel (with the Blue Sun Corporation the new Wolfram & Hart) along with Cabin in the Woods. Slayers still exist according to it. 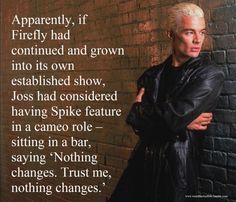 i really liked it and you will probably recognise most of the actors from other Whedonverse things so that should be fun.
Im sure you'll love it.

I think the show is really enjoyable, personally its one of my favorite sci-fi shows. The characters are all pretty likeable but if I had to choose my favorites I'd probably say Kaylee and Wash! There are some really standout episodes like Shindig and Jaynestown.

I'm looking forward to seeing what you think of it!

I really liked it. It is kinda different to Buffy + Angel, but it does share the same mix of humour, action, sharp writing, great dialogue, imaginative twists on the genre and with the characters always being the main focus of the story.

Nathan Fillion is especially great as Mal and he holds the whole show together, but theres lots of good characters and the chemistry between them works really well

Sineya
I loved it, when you finish it make sure to watch the movie Serenity.
Very funny show and I love the one liners...

How exciting! I really liked it, although it's a bit disappointing that it's only one season and a movie. My favorite characters are Inara, Mal, River, and Kaylee.