I know she's a very unpopular character in the fandom and possibly even more within the general audience, but I have so much affection for the character.

I thought we could have a place to discuss what we love about this precious key!

Despite not getting much in the last season, she has one of the best character growths in the series and she's even more likeable with time!

Anyways, I love her dearly and she feels very real to me (in terms of relatableness)

Sineya
I agree. It's honestly a shame the writers didn't seem to plan anything for her post-season 5, because I feel like, as a character, Dawn had a lot of squandered potential. But I do completely agree that her growth was very well done; which is why she became one of my favourite characters in season 7. When she had her moments, they really were great moments.

Dawn is one of my favourite characters. She was so relatable in S5, it couldn't be easy to be the sister of the Slayer and finding out you were some sort of mystical key must have been devastating for a young girl. She actually coped really well, finding out her whole life was a total lie. Then she has to watch her mum and her sister die. And she's left all alone, carrying all that guilt and with a father who didn't even want to care for her How you couldn't sympathise with her is beyond me.

She was given extra depth in S6, but still had to deal with such emotional pressure, it's surprising Dawn didn't get clinical depression Yet she reamained so loving and caring, always wanting to help, which she was eventually allowed to do in S7. In the comics Dawn is an integral part of the scoobies. She's as much a hero as any of them. The Core (Season 9) was one of the most moving in the whole of the Buffy comics, because Dawn was slowly fading away. The thought of her not existing anymore was really sad, and showed how much Dawn had come to mean to the gang.

Sineya
Dawn is one of my favourite characters and I don't get the hate really. The two most hated characters are Dawn and Connor, but Connor is so much worse than Dawn. They don't even compare. Dawn grows into a strong young woman who keeps fighting no matter what happens to her.

I think she is just really great and kudos to the actress for having to deal with the pressures of acting and receiving so much hate at such a young age!
F

I never understood the hate or the dislike. She is a great character. There are so many little scenes that show how loving, caring, funny and brave she is.

She cares for Cassie and also for Amanda. She steps back when she finds out Amanda is the Sunnydale Potential without ever mentioning it, let alone complaining. She sings to the anchovis on her pizza. She is the only one who stands up against Spike after the AR-Scene and threatens to kill him, if he hurts Buffy ever again. That was really brave. No one else did that.

I love, that she is into the research thing in season 7 and maybe they could have shown just a tiny bit more of that to make her role within the scoobies more important and valuable.

edit: and the greenhouse thing she did during the hellmouth battle was awesome !

Black Thorn
Dawn and Buffy have the most realistic sibling relationship I've ever seen on TV. They're absolutely adorable, and as someone with both an older and younger sibling, I can totally see myself in both Bufy and Dawn. And she's fantastic in the comics too! 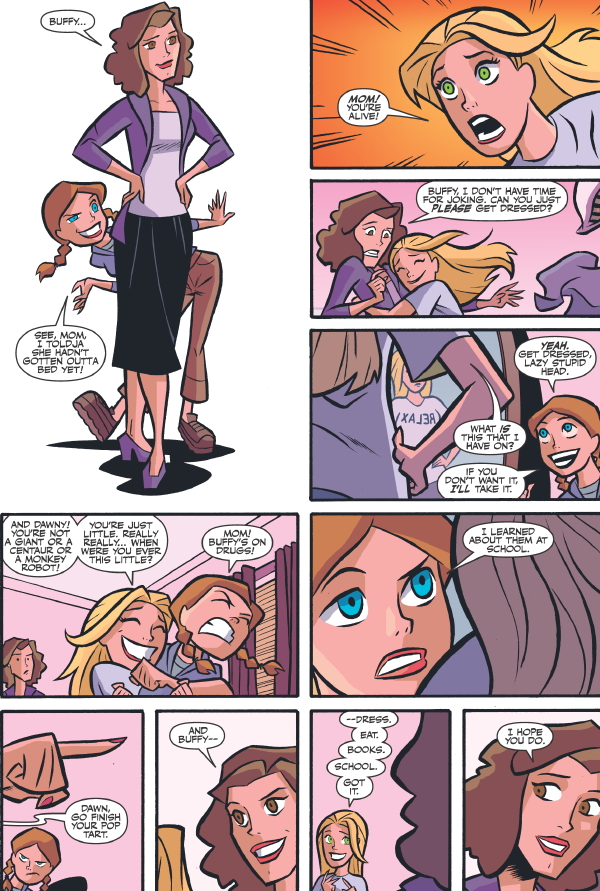 Zenseem
OMG I loved everything about you post. And Dawn is indeed perfection

Sineya
Dawn is actually my third favourite character but sadly she is known to be a hated character outside of this board at least.
It's quite sad actually I was on nameberry the other day and this woman wanted to call her child Dawn Summer (first and middle name), she didn't get the Buffy reference and somebody responded with it doesn't matter because Dawn isn't an iconic character
Dawn was very special and iconic to me, and even though I wouldn't have minded if she'd jumped in season 5 (because I think that would have been a lovely end to her arc as the key) I didn't mind that she stayed.
W

Dawn has so many great moments on the show. I was a little ambivalent to her at first. Her appearance was a bit of shock. I think it was the scene where she cuts her arm with a knife that sold me to her. Then it is her relationship with Tara, Spike, Buffy and Xander. Dawn kept the show in touch with its high school roots. She didn't just compliment the show. She was essential.
This video is going to make you feel like you belong on some government list.

This! Michelle did an amazing job. Nobody better blame her for Dawn's unpopularity.

Loving the participation in this thread!!

Dawn is also really protective of the people she loves. She's not afraid to speak her mind despite her young age and no superpowers.

I think the issue with Dawn is that First impressions count. In Season 5, we saw a teenage Dawn who acted like a child rather than a teenager because Dawn WAS written to be a child before MT was cast. However, the writing didn't reflect this so we ended up getting scenes where Dawn eats ice cream like a moron and is generally stamping her foot and throwing a tantrum because she's not getting the attention she wants. This negative view carries over into season 6. People tend to like season 7 Dawn because she shows maturity, or in other words, she acts her age.

MT was never the problem, in fact she's probably the reason why people tolerate/like Dawn. When she's given chance to shine, she does well. It's the writing of Dawn that's the main issue especially in the early days of season 5. All characters have to go through a trial period before they are accepted by the audience, some take little to no time at all (Spike) whilst others take a lot longer (Riley), Dawn is on the Riley side of the scale. She becomes more likeable on rewatches.

Sineya
After the initial shock of her appearance I must admit I found her a bit annoying (Something it turns out was due to the part being written for a much younger girl)
but she grew on me & by season 7 she had surpassed some of the others in my estimation (mainly due to the widespread s7 character assassination)
Can't say I ever hated her as such....for me she went from 'Meh!' to 'This girl needs more screen time'.
W

Yes, I could never like someone who does not take ice cream seriously.

WillowFromBuffy said:
Yes, I could never like someone who does not take ice cream seriously.

How can anyone over the age of 12 muck up eating ice cream that badly?
W

How can anyone over the age of 12 muck up eating ice cream that badly?
Click to expand...

She's ogling Xander. Perfectly valid reason. I think he has longish hair in this episode.

WillowFromBuffy said:
She's ogling Xander. Perfectly valid reason. I think he has longish hair in this episode.
Click to expand...

There's a difference between ogling and spilling it down yourself and having it plastered round your face because you're incapable of eating it properly.

DeadlyDuo said:
There's a difference between ogling and spilling it down yourself and having it plastered round your face because you're incapable of eating it properly.
Click to expand...

I agree, seriously, a dog eating ice cream would be cleaner than this. This is an example of Michelle being way too old for what the writers wanted Dawn to be.

Little girl lost in the woods

Sineya
One of my favorite moments for Dawn was in Potential. I really liked her in this episode. She's the best part about it.

Mylie said:
Dawn is also really protective of the people she loves. She's not afraid to speak her mind despite her young age and no superpowers.

Of course it could be said that it's easy to be brave in the face of danger when your sister has awesome superpowers & is magically inclined to protect you......

But I must admit the three scenes you posted made her a much more likable character.....something I wish they had built on more in s7.....

After the shock wore off in season 5 , I actually really liked her. Yes, she was annoying as heck, but once she discovered what she really was I adored her. She is so heartbreaking, and brave. She's loyal to those she loves, and she stands up to Glory with a lot more grit and bravery than most 14 years old would. I loved that she was willing to sacrifice herself, even though Buffy didn't let her. It was a real adult moment for Dawn, being willing to die to save everyone else. I think some fans forget how bad ass and brave she actually is, cause she's so irritating

Season 6 I literally can't stand her, and I blame the writing. She talks like a 5 year old . What 15 year old says " it gives me belly rumblings when you fight?" Or " you don't want to miss the latest creature feature!!" And the iconic " get out get out get out?" She handled finding out she was a ball of energy and her mothers death in season 5 much better than she handles being ignored in season 6. The writing of her character jumps around, one minute she has friends and boys she likes, and a social life, the next shes completely dependent on her sisters friends and is stealing things for attention. In one breath she says she's being treated like a kid and wants to be taken seriously, and then in the next she's shrieking like a 2 year old and acting like a brat.

I feel like season 7 finally evens her out. She dresses her age, she's funny and charming. Once again she displays bravery and loyalty, and she finally acts like she has a brain in her head lol. I love how she's so gung ho about researching, even reading Sumerian. Not to mention on a shallow note how absolutely gorgeous she is. I just love season 7 Dawn
You must log in or register to reply here.
Share:
Facebook Twitter Reddit Pinterest Tumblr WhatsApp Email Link
Top Bottom