Mr Trick said:
Yeah I hate that end scene with a passion I know its only a joke and all, but it still bothers me...
Click to expand...

Further, do we really believe Angel would have a good taste in women's clothing? It's unbelievable on so many levels. I think we hate it because it's such an offensive trope that women's anger is not to be taken seriously by men and can be placated with gifts.

I did read with interest @Cordy_Chase's post above about the meaning of it, but I think if it was meant to be a deeper atonement, Cordy wouldn't have been squealing with joy, but a more serious "glad you understand." That version would actually have worked much better, and would also have allowed Cordy to move on from her anger, while treating the character with respect.

Cordy_Chase said:
I'd like to address a particularly important aspect of this episode; Angel buying Cordelia's forgiveness with a pile of clothes.
This is popularly believed to be a shallow gesture on Angel's part which Cordelia too easily accepted but that's looking at it too literally (which Wesley is also guilty of).

When Cordelia moved to L.A she was homeless with little more in her possession than the clothes on her back and what was left of her savings from her part-time minimum wage job at the dress shop after her transit expense just so The City of Angels could reject her as Sunnydale had.
Her acting pursuit was leading her nowhere, she had no college education which she couldn't afford to obtain and one job experience but in 'City Of...' we see her with a roof over her head (albeit one that should have been condemned) and the same fashion sense she had in Sunnydale which was by no definition cheap. This is not only illustrated via the dress she wore to the penthouse party but also by the number of other nice clothes seen in her closet.

After Doyle died, the little tangible evidence of his existence that was left behind, including his favorite mug which Cordelia placed sentimental value on and the original office with Angel's adjoining apartment itself, the one place touched with the presence he had with Angel and Cordelia was destroyed when Vocah blew the building up.
In that sense, 'To Shanshu in LA' could be considered Doyle's final episode because in essence that was when his chapter truly closed and he faded.

Angel did essentially the same thing in giving away Cordelia's clothes. He'd removed her presence from the hotel, discarded the evidence that she'd touched his life, of her self-sufficiency, her livelihood. I believe that was what hurt her, that as far as she was concerned he'd disrespected and erased her not that she lost material possessions.

Replacing the clothes wasn't to exploit her materialism for her forgiveness, it was to illustrate that he understood her feelings, that he cared that he hurt her and did value her presence in his life.

It also happens to be a flippin' adorable scene! The way Cordelia smooches his cheek and they both do a little happy dance and Angel is grinning like a schoolboy whose dream girl just agreed to be his prom date. <3

The Cordelia/Harmony/Willow lesbian misunderstanding is another highlight of this episode. 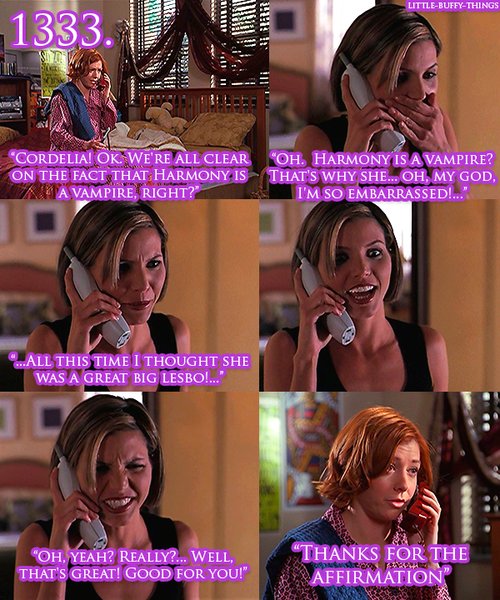 Even though it's been 2 years, I want to add that this is Cordelia Chase.
She was raised spoiled in a wealthy home therefore probably learned to normalize being bought. We can also assess that she loves being spoiled. I believe she tells Angel or someone at some point that her ideal man is one who showers her in blue boxes (which I think is a reference to Tiffany's but I'm not that kind of gal myself).
Therefore even if the clothes had been purely shallow, shallow works for Cordy.
N

I hated the end scene with the clothes when I first saw it, because of the scene in a previous episode where the team are reuniting, and Angel asks if Cordy is Ok with this massive smile, and she just says, "No. You hurt my feelings." It was so raw and I loved the impact, and the idea he'd have to take time to earn the trust and affection back, (kinda in a mirror of his whole redemption arc?). Then he gives her some clothes and everything is fine. It felt so shallow and I was livid lol.

But on thinking about it more, there is a precedent of clothes representing a peace offering for Cordy, and that's way back in Buffy S3 when Xander buys her the prom dress that she couldn't afford. Like @Cordy_Chase said they're not just clothes, they're integral to her identity. As a gift it's an acknowledgment of that. It's like saying, I see you.

Still think it's clumsily done though.