Cheese Slices said:
This episode is a mixed bag for me. I think it tries a little too hard on all accounts, and ultimately I would say that what works only works because of the performances. Not to say it's badly written all the way through, but it lacks subtlety in a lot of places and the pacing is slightly off.
Riley only truly angers me in three episodes : Into the Woods, As You Were, and this one. Boy is he annoying and cringy here. I guess some of it can be pinned on his heart problems, but I don't think it would affect him that deeply, pyschologically speaking. He ruins Buffy, Xander and Giles' moment, is being a drama queen when Buffy's mom is sick as well, and behaves like a petulant child overall.
As a result, the B plot with Spike is a lot more entertaining but also compelling, and though it is borderline ridiculous at times, JM's performance does a lot to push back against it (except when the ridiculousness is intentional, obviously). Spike and Harmony are funny together, and we get a lot of great lines from each. Spike's growing frustration with Buffy is played extremely well (I especially like the touch of having her slap him instead of punching him, which tends to feel more humiliating). Buffy's also growing frustrated with him, though unfortunately this thread is left hanging loose by the end of the episode.


+ I wasn't a fan of the dream sequence prior to this rewatch, but now I love it You've got Spike, in his own dream : 1) being his usual drama queen 2) being the one that's actually taking his clothes off 3) probably replaying a sequence of one of his soap shows. Also interesting the fact that he tells Buffy he loves her while she tells him she wants him.
+ Spike's realization and subsequent behavior is just so him : he almost never looks back. He's had one erotic dream about Buffy and he's like "well, guess I'm gonna go hang out in her yard then".
+ Also his offense at the notion that he can't pick flowers 🤣
+ Harmony is truly adorable
+ I kinda dig "bitchy" Buffy. She has no time for anyone's shit.
+ "If that's what I wanted, then I'd be dating Spike"...oh boy
+ I like the stethoscope scene; yes, Dawn is a little old for that, but it's neat nonetheless

The whole Marat discussion seemed to have no relevance to the episode. While the whole Dawn cereal and stethoscope scenes were not what a 14yr old would do

Btvs fan said:
The whole Marat discussion seemed to have no relevance to the episode. While the whole Dawn cereal and stethoscope scenes were not what a 14yr old would do
Click to expand...

I think it was supposed to say something about Riley. 'Cause he used to be a "moderate" (ie siding with the government) then turned to the more "radical" side of things (ie the Scoobies) and it ended up being his downfall, downfall which was directly caused by a "radical" woman (ie Buffy). I guess, maybe ? 🤷‍♀️
B

Cheese Slices said:
I think it was supposed to say something about Riley. 'Cause he used to be a "moderate" (ie siding with the government) then turned to the more "radical" side of things (ie the Scoobies) and it ended up being his downfall, downfall which was directly caused by a "radical" woman (ie Buffy). I guess, maybe ? 🤷‍♀️
Click to expand...

Cheese Slices
haha well I think at best the writers were like "eh it works if you squint a little", and at worst it's just me fanwanking the hell out of it.
B

@Cheese Slices Lol the dodgy French Revolution comparison is nothing to Furys attempts to use the Hunchback of Notredam comparison in Crush. For that he either hadn't read it properly or had been deliberately selective in his interpretation.

Then there are the Literary references Angelus throws out in Angel S4 which are a bit....😕

Btvs fan said:
@Cheese Slices Lol the dodgy French Revolution comparison is nothing to Furys attempts to use the Hunchback of Notredam comparison in Crush. For that he either hadn't read it properly or had been deliberately selective in his interpretation.

Then there are the Literary references Angelus throws out in Angel S4 which are a bit....😕
Click to expand...

David Fury has many qualities, but subtlety sure ain't one of them 🤣

Which references ? I'm sorry, it's been too long since I've watched Angel.
B
Btvs fan
The Rag and Bone shot to the heart amd there were pthers too he says to Wesley in his cage in Souless
B

Cheese Slices said:
David Fury has many qualities, but subtlety sure ain't one of them 🤣

Which references ? I'm sorry, it's been too long since I've watched Angel.
Click to expand...

If you ever decide to rewatch Angel its best to be selective. Like Lani said on Still Dead. Its Highs were high but its lows were low.
Take S3 for example I could watch Lullaby with Darla killing herself to save her unborn child but then I could skip most of the episodes until Loyalty and Sleep Tight and the birth of Dark Wesley. Even Joss Whedon's Waiting in the Wings which others rave about I wasn't a big fan off personally

Cheese Slices
yeah, maybe I will eventually but I never managed to really get into it. The lows were way too low and the character dynamics weren't as compelling to me 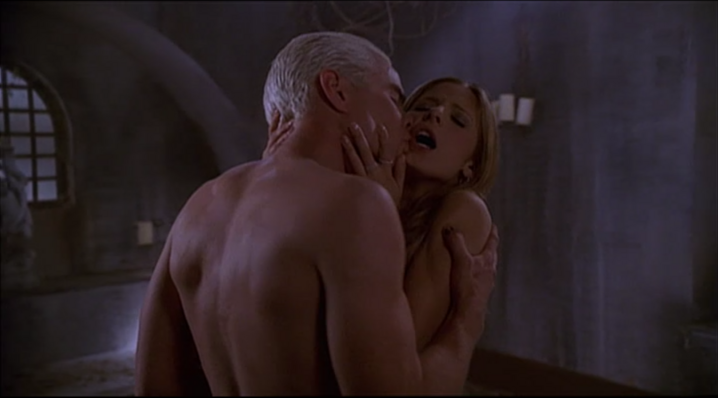 And so it begins.

A lot of things are happening in this episode that makes it feel like the great layered scripting that would come to define Buffy (and more modern 2000s television shows), even beyond the contrived way of writing out Briley and starting the Spuffy train. You have character moments for Willow, Dawn, Xander and Joyce as well, either foreshadowing coming events or showing how far some of them have progressed. For example, building off the last episode, "The Replacement", Xander is recognized as someone more competent now, a skilled carpenter. Willow's development, on the other hand, calls back to "Restless" and her perception of Buffy as a dunce, even going so far to have the following moment:

Subtly, Willow has now felt a sense of superiority with her magic over Buffy, more than just seeing her as an equal. What this means in the broader context of this season (and season 6) remains to be seen.

It's nice to see that the show has moved on from the college scene even though Buff should be a sophomore at this point (if my knowledge of the American education system is correct). I saw glimpses of this even while I was watching earlier seasons, so I was anxious to see elements of school drama slowly fade out even during my viewing of season 4. School drama can be nice for a while, but with Buffy getting older, I would like to see her dealing with more adult issues than... well, "Beer Bad".

At this point, I'm not even going to call out any Joyce foreshadowing anymore because it seems like it's just gonna pop up every other episode. It's a nice and dramatic development this episode, don't get me wrong, Joyce landing in the hospital. Definitely a clearer foreshadow than the previous episodes. We get to see Dawn acting very much like a traumatized kid who witnessed her own mother collapsing. Her awkward way of trying to join the conversation between Buffy and Willow is so totally me, even in recent conversations of mine. Sometimes, you just don't know how to join a conversation in a natural non-intrusive way, yet you would still want to be part of the gang.

Harmony has returned to Spike, the old flame that emotionally abused her once, after gaining her independence two episodes ago. Sigh. It's a realistic portrayal of real life abuse victims, but man, I feel bad for Harm. She deserves better and her attempt to become independent was very fun to watch in "Real Me".

And yes, now we get to Riley. Him behaving like a petulant child seems to be born out of some vague insecurity he couldn't get over, but I have a hard time understanding his lack of appreciation for Buffy's love. For one thing, I never bought their relationship; they never felt compatible, and Riley has always felt like a stock love interest who could easily be replaced by any normal guy. And yet, Buffy seems to like him nonetheless, perhaps because of this normality, perhaps because of plot obligations, so when Riley becomes insecure over having Buffy's love for him as a girlfriend (even though there's no chemistry in the first place), I'm just left with a big shrug. It doesn't feel that shocking to me that Buffy would be bored of Riley - we all got bored of him a long time ago - but as it is now in this episode, Buffy even states that this is not the case, and she still loves him, so get over it, faux Captain America. I'm more surprised to see this relationship work out that long.

It's this kind of insecurity that's the reason why men like Riley won't be able to make relationships work. Even if Buffy loves him wholeheartedly, Riley wouldn't believe that because he has so little confidence in his ability to compete with Buffy's exes. And that's another thing: it's not a competition! Only Riley the meat-for-brains would has this toxic masculinity thinking that a woman would only love you for how strong or competent you are. Look at Xander and Anya! For all his insecurities, Xander is able to believe Anya loves him for whom he is and considers her the most important person in the world to him (as seen in the previous episode).

So now what we're left with is the exit of Briley. Well, I say, it's about darn time. Get out, leave! I, for one Bangel fan, welcome our new vampire shipping in Spuffy.

6/10, and only because of the fun Spike subplot.

Sorry for exhuming this old thread, but I've just watched "Out of my mind" again tonight, and boy do I share your mixed feelings. Completely agree with Harm and Spike saving the episode from a generalized "meh".

However I do love the first sequence between Buffy, Spike and Riley, it's really funny and I'm 100% on Buffy's side about Riley being clumsy, if not cringy.


spikenbuffy said:
BTW, do you think that Spike's fall underground in a coffin was kind of a metaphore or something else of his fate towards Buffy?
Click to expand...

Absolutely! As Ian from Passion of the Nerd says in this video, we can read his repeated "falls" (remember Spike being caught by the Initiative at the beginning of 4x06 Wild at Heart, while he was watching Buffy) as he's been "falling" for Buffy for a long time.
You must log in or register to reply here.
Share:
Facebook Twitter Reddit Pinterest Tumblr WhatsApp Email Share Link
Top Bottom