Sineya
I really like Willow's hair. She looks good with the curlies: 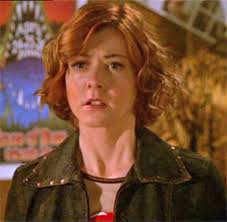 Other than that, is it me or are Willow's worst qualities come bubbling up in this episode? She belittles Giles for being an idiot, she thinks Xander is often out of line (which is more true in the earlier seasons, but not really season 4 or 5... except maybe "Into the Woods"), she steals from Giles without remorse, and she callously practices magic without the proper precautions. If she knew Anya would disrupt her spell, why didn't she just go into a secluded room or perform the spell later with Tara? Willow shares some of the blame too for bringing about that demon.

I like Willow when she's more sensitive about her words while remaining assertive and confident, but this new reckless Willow who casually wields dangerous spells around and gaining an ego due to her mastering magic? Not so much. You'd think she's learned her lesson from "Something Blue". I could see how this development would lead up to Dark Willow in season 6 though.

But I like how this episode uses the opportunity to point out some of the past transgressions that still have fans talking today, such as Willow cheating on Oz, or even Anya's past life as a vengeance demon. It's nice to get the perspective from Anya that she really has left behind her life as a man-killer, but I almost forgot about her past life until it's pointed out this episode, probably because she's been just "one of the Scoobies" for a while now, not a vengeance demon.

I love Spike's portrayal here. Let's remember: he's still a demon, a vampire whose heart is driven by his base desire alone rather than out of any genuine compassion, so it makes sense that his actions here are driven by his desire to impress Buffy and win her over. lol It's cute.

Overall, it's a fun and light episode that helps us recuperate from the heavy drama of the previous episode. We've got a demon here that acts like he walked out of the middle ages with his baby-eating and all around cartoonish villainy. I don't even really mind that much that Buffy's pain from break-up is played for laughs here in a somewhat comedic fashion whenever Xander and Anya's relationship is brought up in front of her.

TamsinValencia
I'd like her hair if it was a bit longer. I wasn't feeling it here.

I like Willow, but she definitely comes across as entitled in this episode. It's her contempt for Anya that really grates on me.

This episode is just ok

Black Thorn
This episode is always the one I will forget about until I rewatch again.
Anya does look very pretty in this episode. I love her hair and her skin is beautiful and glowing (Must because of after the first scene with Xander).
Buffy's pink shirt slays. It's beautiful and elegant.
An average episode. I do agree with Willows attitude is a bit off and entitled. Especially with Anya. Xander usually being caught in the middle.
I love Dawn and Buffy's little scene where Dawn stands in the doorway and wants to hang out with her. Like I used to do when I was younger.
The demon provided action and was quite entertaining. I wasn't overly invested in him but good for some action for this episode.

I would definitely say it’s one of the weaker S5 entries.

The only thing I remember is the troll asking where there are babies to eat, and even that is more because it pops up in Spike “best of” montages. Definitely not a bad episode, just a really middling one.
You must log in or register to reply here.
Share:
Facebook Twitter Reddit Pinterest Tumblr WhatsApp Email Share Link
Top Bottom