Sineya
Buffy and the Scooby Gang (the name was Xander's idea, he's workshopping it, it probably won't stick) delve deeper into the heart of Sunnydale's underbelly-and make a shocking discovery about the true nature of the Hellmouth. Meanwhile, Drusilla-AKA THE MISTRESS-sets her sights on Cordelia, as Cordy and Spike find accidental common ground.

Oh lord, it really is Spordelia.

I hope not but think you might be right. Either that or it's going to be about having to pretend you're something your not.

Spike was initially described as Drusilla's "twisted" lover, but then the writers interview seemed to contradict that and basically implied that the comic book version of Sprusilla is a controlling one rather than a relationship of equals. So maybe "twisted" is something to do with Spike having a soul?

I hope so. The sooner they get Spike away from Drusilla the better. I don't want to see a rehash of that couple again. It ran its course for me.

Spanky said:
I hope so. The sooner they get Spike away from Drusilla the better. I don't want to see a rehash of that couple again. It ran its course for me.
Click to expand...

If this was the couple from the show, I would really strongly disagree with you because they were great together However, if the writers are planning to do what I think they're going to do in regards to that relationship, then I agree it's best to part them before too much damage is done and the ship is completely ruined.

DeadlyDuo said:
If this was the couple from the show, I would really strongly disagree with you because they were great together
Click to expand...

The only thing that made Spike and Dru work as well as it did on the show was JM and JL. I don't think the comics could recreate their chemistry even if they tried. It's better they don't and take it a different direction.

If the apocalypse comes, beep me!

Black Thorn
Wow, it feels like these are released quite often. How many issues are in a season?

Taake said:
How many issues are in a season?
Click to expand...

They had previously stated that they are no longer doing seasons.

Taake said:
Wow, it feels like these are released quite often. How many issues are in a season?
Click to expand...

The first four issues will tell one unified story, but apart from that, we don't know much about the larger structure. And nothing has names. Issue 1 through 4 make up Volume 1. I feel like named episodes and comic book issues is a big part of the Buffy brand.

WillowFromBuffy said:
And nothing has names. Issue 1 through 4 make up Volume 1. I feel like named episodes and comic book issues is a big part of the Buffy brand.
Click to expand...

Where do you have that from?

WillowFromBuffy said:
Where do you have that from?
Click to expand...

The comics. The page that generally has the comic title and credits on them after the intro.
W

Spanky said:
The comics. The page that generally has the comic title and credits on them after the intro.
Click to expand...

Wouldn't that generally be the front cover?

I haven't seen BOOM or other retailers list them as anything other than Buffy the Vampires Slayer #1, 2, 3, and so forth.

Spanky
The third one does not have a title. 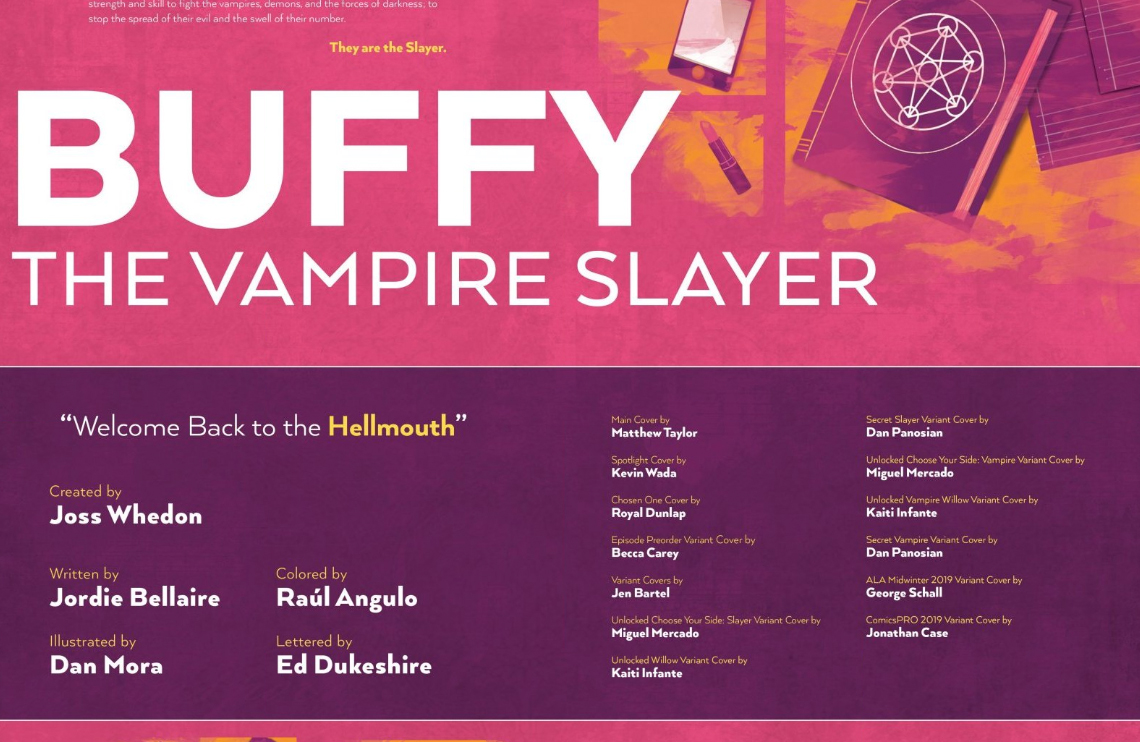 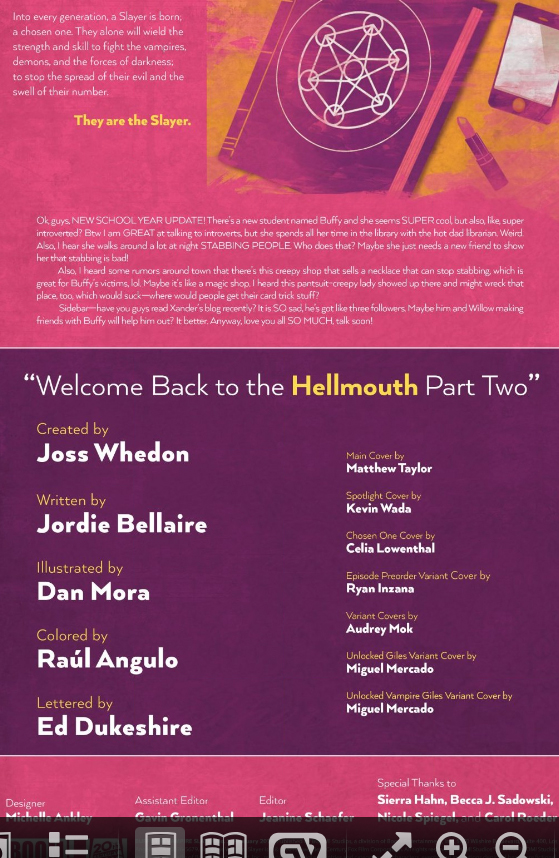 If you want I can post the third one tomorrow.
W
WillowFromBuffy
Thank you!

Black Thorn
Random thoughts:
I like that Dru calls Spike William against his desire to be called Spike. And her saying the name Spike didn't even work in the 90s.
Some of the dialogue seems really exposition-heavy still.
Can Harmony tell the future? Her dreams about Sunnydale being swallowed into a big fire pit?
I am not sure what I think about Camazotz. Don't really like the idea of a big bat attacking everyone and them being all nonchalant about it. It seems too "comic booky" and not very realistic. But I do kinda, maybe, like the idea of the Slayer getting a "Pegasus" but also... I don't.
Cordy saving Spike was an expected outcome, sadly.
Xander saving Buffy was alright, but how he was dressed? No. No. They made him look like a Village People reject.

Um... WTF, really? Really? So Giles is singing in the cafe (unaware that there is a giant bat and said giant bat is broken free, mind you) and then the giant bat attacks and knocks him out. And then Willow shows up with the charm to contain the giant bat because Mr. Giles called her and told her where to get it. I'm sorry but... what? how? And this was BEFORE he even learned that the giant bat was in fact Camazotz and knew how it could be contained. I call a big BS on this.

Anyway. I posit that the "power" that Dru is looking for in Sunnydale will be none other than... drumroll... Angel.

Black Thorn
And reading this, I changed my mind. I don't think they are making Xander a vampire, I think it's all subterfuge. It's too obvious. Especially with that last panel. Make everyone think something BIG! is going to happen when it fact it will be nothing major at all. If I am wrong and they DO make Xander or any of the core four a vampire I will be hooked; I just don't see it happening.

It's like the gods of comics book heard my complaints about there being no titles and decided to remove titles completely.

This was was decent, but not nearly as exiting as the last one. The fourth issue is supposed to have a huge satisfying climax, but a how can that be, if there is no build up? This issue was like one big diversion with little new information and the monster is effectively neutralised at the end. Will they use bat boy to fight whatever Drusilla hopes to summon form the Hellmouth?

I liked that Spike's nickname hasn't caught on and that he's still trying to make it a thing.

Oh, and Harmony is here, but it wasn't as exciting as it should have been.

Xander saves Buffy with a shovel and then we see a cool shot of him framed by batwings (or vampire-y angel wings?)

God damn is it refreshing to have such amazing art which looks like the actors in a Buffy books 😍🥰
Click to expand...

Agreed. Much better than any art Dark Horse gave us.