I've seen some threads that have specified bits and pieces from certain seasons, but not one that just broadly discussed moments regardless of season or medium. As such, I humbly ask my fellow Spuffies (and anyone in general )to share some of their favorite moments, period! Gifs, screenshots, images, or video, I'm interested to see and discuss what moments people may have latched onto that others might've overlooked or never noticed, moments that you may have considered a peak part of their relationship, as well as those moments that just rock your socks off. This ship is so fantastic and just filled to the brim with wonderful moments in both of the shows and the comics, and I'd love to see what everyone here has in mind or holds dear. Plus, I think everyone could use that little boost of wholesome, feel-good, or adorable romance once in awhile, especially when things in the real world get you down

To get us started, one of my personal favorites from the Season 11 comic. 😭❤️ 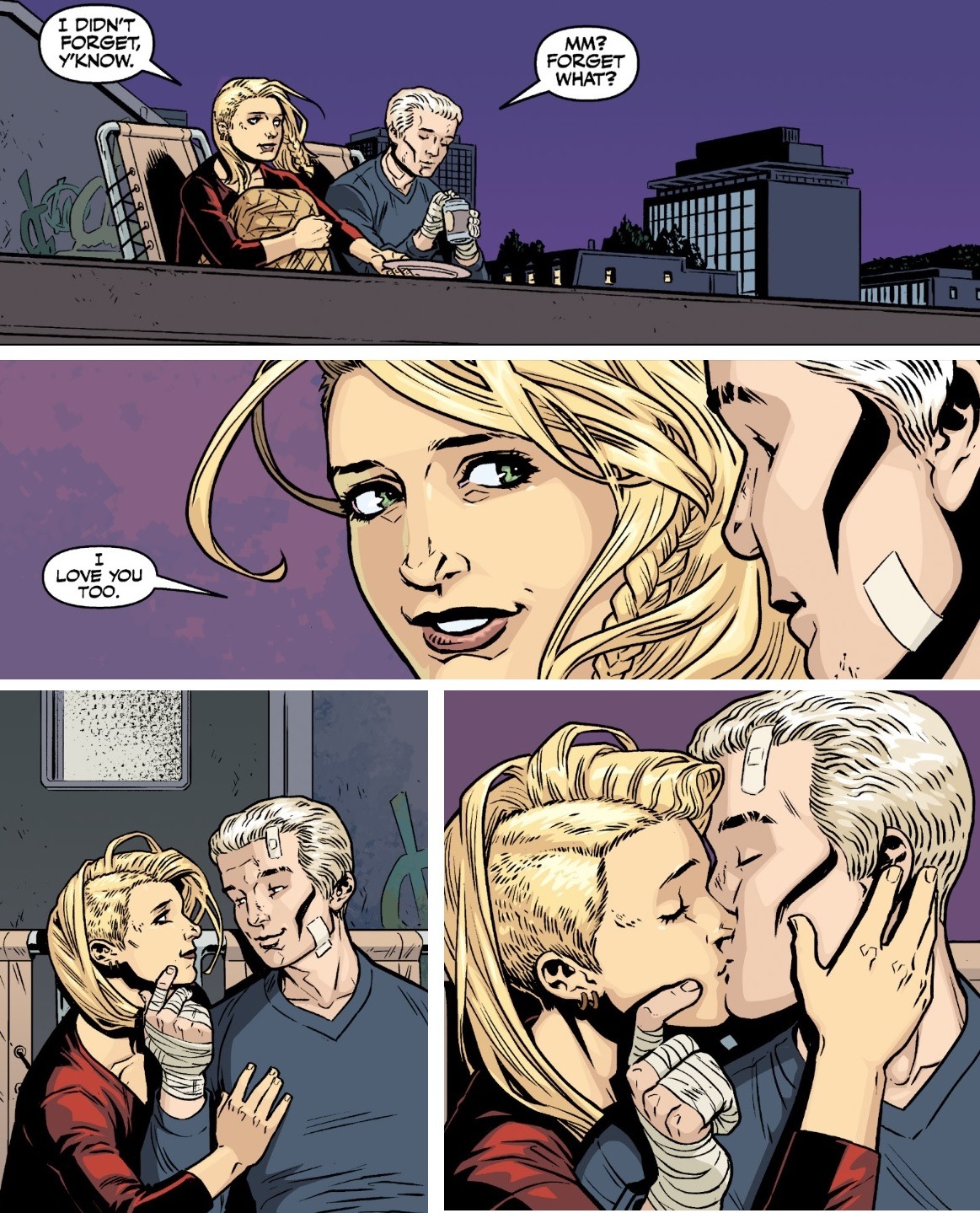 Joan the Vampire Slayer
I loooove this.

This will always be my go-to; what I consider the start of what their relationship would become from then on until Chosen, bad and good included.

There are so so many, but their first scene in After Life comes immediately to mind for me - the way it's a callback to their final scene in The Gift, and how they kind of pick right up from where they left off from that moment in a way even though so much has happened in between. I love that Dawn is there as well at the top of the scene because she was there in The Gift with them too even if not in person.

Spike's face when he realizes it's really Buffy and not the bot and the way the camera is showing us Buffy's perspective - moving down the stairs as she is moving down the stairs looking down at him looking up at her and then the camera stopping when she does and continuing to look at him as he continues to look at her - it feels intimate, looking through Buffy's eyes like this, seeing him look at her like that, and I don't know if that's ever happened before with the camera work in this way? I mean it probably has, but this is the first time I've really noticed it. The way he knows what happened to her when he sees her hands, can understand what she went through because he's gone through it too (so! much! mirroring! between these two characters from his first episode right up until his last (on BTVS anyway) I love it), how when he guides her into the living room so he and Dawn can take care of her ("we'll take care of you"), he reaches out to touch her shoulder but stops himself until they sit down together and she lets him have her hands.

And they look up at the same time like how they take a breath at the same time during the porch scene in Fool For Love. The way he is so gentle and careful and patient and kind and he waits for her to speak first. The way he kept track of the days. Nods, when she says it felt longer for her and his soft "yeah". He is doing everything right for her in this moment and he's doing it completely automatically, instinctually, perfectly. Honestly every single scene between them in After Life is just... idek where to start. Every single moment just really has me by the throat lol. Anyway I have a million things to say about this scene, this episode, this season in general lol, but yeah, I love this moment.

Black Thorn
The end of Once More with Feeling where they kiss.
Where Buffy comes back and Spike mentions how many days she’s been gone and holds her hands.
When Buffy tells Spike she loves him in Chosen.

Sineya
My mind always goes to when he was comforting her on the steps when Joyce died, it makes it sweeter that he went to kill her and just couldn't bring himself to do it. Also 'After life' and the Tabula Rasa ending too. I think they are the less obvious ones that come to mind <3
T
thrasherpix
I just realized how often I loved Spike and Joyce together, some being favorite scenes. Not romantically, just as they were. And how touching when he came to anonymously drop funeral flowers for Joyce though Xander caught him and assumed otherwise

LemonBanana said:
My mind always goes to when he was comforting her on the steps when Joyce died, it makes it sweeter that he went to kill her and just couldn't bring himself to do it.
Click to expand...

Aren’t you mixing 2 scenes here ? Seem to me that you are talking about « fool for Love » but Joyce isn’t dead yet at that moment.

Antho said:
Aren’t you mixing 2 scenes here ? Seem to me that you are talking about « fool for Love » but Joyce isn’t dead yet at that moment.
Click to expand...

Ah yes sorry I think I'm getting mixed up, I mean the scene in fool for love but I do love Spike and Joyce's friendship now you have reminded me!

Their friendship is so wholesome.

Becoming Part 2 - They were mortal enemies and yet they worked together with mutual respect. They were able to trust one another to deliver on their promises.

That's when it started IMO...
But then again... I am not a pure Spuffy shipper, lol
C 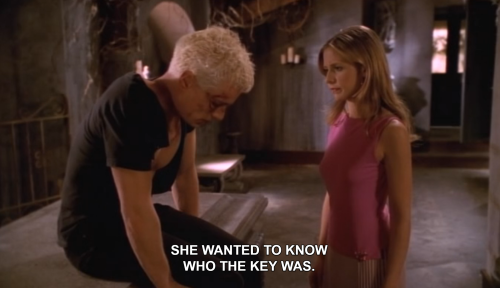 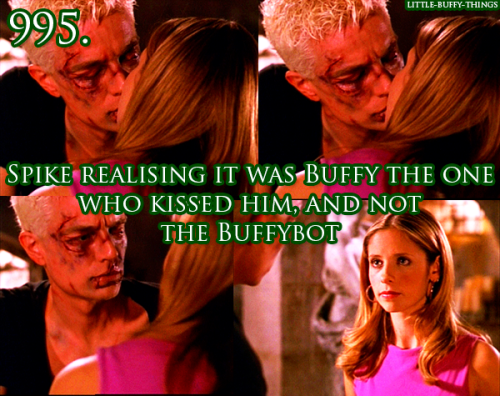 As no spuffy fellows didn't mention this scene in Intervention yet :
This scene & the end of Fool For Love are both tied as my favorites Spuffy scenes.

DeepBlueJoy
Totally love this. Some of the best acted moments in the series IMO.

I think Intervention was the final, absolute turning point for me.

Before it, his feelings might have been equivocal, and "just" obsessive. After this, he had put his life on the line.

When she realizes what he has done, what he has risked - I think she begins to view him very differently. I think she starts to SEE him - and feel his care - and she begins to respect and trust him. These are huge.
You must log in or register to reply here.
Share:
Facebook Twitter Reddit Pinterest Tumblr WhatsApp Email Share Link
Top Bottom