As I'm sure most people here know Giles was originally to have been the guardian of the deeper well who would have told Angel and Spike that there was no way to save Fred. Would have been a pretty cool cameo, I'd like to have seen Giles on Angel, but as it was Drogyn was quite a cool character. (It's a shame though that Giles last contribution in the televised Buffyverse is to be a bit of a dick by refusing to get in touch with Willow because Angel is working at Wolfram and Hart. Maybe that was his revenge for Jenny Calendar's death after all LOL.)

Still a lot of people have speculated that Giles was therefore to have fulfilled Drogyn's role in being the one that Angel killed at the end of the season.

No one has ever conformed this one way or another.

Personally if that was the plan then I am glad that it didn't go ahead as that would have been a terrible way to kill Giles character, having him get tortured and then his neck getting snapped on a show where he wasn't even the main character and his death wouldn't really mean anything to the other characters like Gunn, Lorne, hell even Wesley who hadn't seen him in years.

If they’d had Angel kill Giles it would have been total character assassination - even if Giles is a total dick in Buffy season 7. It also would have destroyed his relationship with Buffy.
I’m not even going to mention the comics - they’re mostly total bull

burrunjor said:
As I'm sure most people here know Giles was originally to have been the guardian of the deeper well who would have told Angel and Spike that there was no way to save Fred.
Click to expand...

I never knew that. Interesting. That makes sense knowing what Twilight did in the comics.

I would have liked to have seen all the BtVS characters on Angel, at any time throughout it's run.

burrunjor
I would have loved a full on Arrowverse style crossover between the Scoobies and the Fang Gang. Probably round about series 5/2 or in Angel season 5. Just to for Giles and Xander to see how Cordy and Wesley had changed.

Faded90 said:
If they’d had Angel kill Giles it would have been total character assassination - even if Giles is a total dick in Buffy season 7. It also would have destroyed his relationship with Buffy.
I’m not even going to mention the comics - they’re mostly total bull
Click to expand...

Yes I agree, no way could they have fitted something that big into Not Fade Away. Imagine if all there was to Giles a character who had been there since the beginnings death was just Spike saying "You did what" before being punched. I assumed it would have gone a bit differently, but even then why bother killing off a main character from one show on another?

" Giles was originally to have been the guardian of the deeper well"- That would have been horrible. Giles is much better as a head schoolmaster for Potentials.
T

I had no idea of this (and today is the first time I saw this thread). If Giles turned out to have been the guardian, I'd have officially thought of the show as being on crack, though I could see him aiding a powerful witch or something doing so ("as the last Watcher, the responsibility falls upon me").

That said, as much as I love Giles (I even take his side in Buffy season 7, though I thought the way he was written out in s6 was lazy at best) I'd have been okay with Angel killing him (I just accept that people die and it can give impact to the stakes)....AS LONG AS Angel's "new epiphany" is explained better than it was (which just barely squeaked by for me as it was, and it helped that I just couldn't really buy Angel was so close to the guy Angel killed anyway). I could see it as part of the attempt to corrupt him (and Illyria explaining it well), but in the end, it was the opposite epiphany he got in season 2 (maybe a new thread comparing/contrasting Angel's epiphany in season 2 and his plan in season 5 should be made).
Last edited: Oct 19, 2020

A lot of people feel that way, but Joss is the creator of the characters, the show, and the story line throughout the entire series, including he comics, and he has affirmed on numerous occasions that the Dark Horse comics are, indeed, canon, so that's pretty much settled. We don't have to like it, that's just the way that it is.


SpikeOrAngel said:
Giles is much better as a head schoolmaster for Potentials.
Click to expand...

I've always thought that having either Giles or Xander come at the end of "Damage" to retrieve Dana would have been much more in character than having Andrew do it. He was completely in character as the semi-buffoon Watcher wannabe throughout the episode, but someone else should have delivered the "Buffy doesn't trust you anymore speech." Buffy will ALWAYS trust Angel. She showed that in Season 3 and many times after that. Angel will always have Angel in her heart, just the same as Spike, regardless of whether she is in love with either, neither, or both vampires. Buffy's trust, once earned, is pretty much set in stone from that point on. The only possible exception to that might be Faith, but I have my doubts, even there.

But I say that, only to say this. Giles would have no more perfect position in the post Sunnydale Buffyverse than as chief and Director of a newly reorganized Watchers' Council. He's probably the oldest surviving Watcher still active Watcher by that time, so it would be logical for him to take that position, and Buffy remaining the Slayer in the world, with the responsibility of training and leading all the newbies, as we saw her in the Dark Horse series, was perfect.
T

Oh, I wanted to add...IF Giles was Guardian of the Deeper Well, then I think they should've shown him dressed as he was in the Magic Shop on opening day as well ("Did you think I bought it? No, it was just gathering dust and I figured I'd never wear it as the Guardian so I thought to try it out for the Magic Box...never thought I'd be wearing it for its actual intended purpose.") 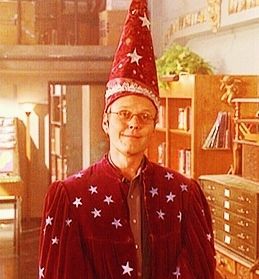 I didn't know this, but I'm glad they didn't do this. If Giles had been the keeper of the Well, we would have wanted much more explanation of how he acquired that job, especially so quickly after the destruction of the Hellmouth. With Drogyn, we wanted more of his backstory (well, I did), but it was acceptable that he was mysterious. We would have wanted answers with Giles.

I also agree that it would have been terrible for him to be introduced only to be killed by Angel. And yet, that would have made the murder much more meaningful and horrible, for Angel and for us, rather than for it to be Drogyn, a character we are only told has a long history with Angel, and whom we haven't seen much on the show.
You must log in or register to reply here.
Share:
Facebook Twitter Reddit Pinterest Tumblr WhatsApp Email Share Link
Top Bottom