Interconnections between characters and episodes

I am opening this thread in order to show the synchronicity and interconnections of some events in relation to characters, seasons and episodes. I think that in this way it is easier to understand the creative methodology and process of the writers of the show.

In Btvs, Angelus returned after:
-He made love with Buffy (the woman he loves)
-The Judge was recomposed
and he fought and was defeated by Buffy

In Angel show, Angelus returned after:
-In a dream/illusion reality he made love with Cordelia (the woman he loves)
-The Beast returned to Earth after being banned
and he fought and was defeated by Faith

OTHELLO: Ay, let her rot, and perish, and be damned
tonight for she shall not live: no, my heart is turned
to stone. I strike it, and it hurts my hand. O, the
world hath not a sweeter creature. She might lie by
an emperor's side and command him tasks
IAGO: Nay, that's not your way.
OTHELLO: Hang her! I do but say what she is: So
delicate with her needle; an admirable musician.
O, she will sing the savageness out of a bear!
Of so high and plenteous wit and invention!
IAGO: She's the worse for all this
OTHELLO: O, a thousand, thousand times - And then
of so gentle a condition!
IAGO: Ay, too gentle
OTHELLO: Nay, that's certain. But yet the pity of it -
Iago! O, Iago, the pity of it, Iago!
IAGO: IF you are so fond over her iniquity, give her
patent to offend - for if it touch not you, it comes
near nobody.
OTHELLO: I will chop her into messes! Cuckold me?
Click to expand...

In "Crush" Drusilla said: "Oh, we can, you know. We can love quite well. If not wisely." when Spike declares his love for Buffy in relation to Othello's: "Speak of me as I am. Nothing extenuate, Nor set down aught in malice. Then must you speak. Of one that loved not wisely, but too well"
-Spike's feelings in relationship to Buffy are similar to Othello's, as a matter of fact, Othello, speaking to Desdemona, said: "If you’re this beautiful when you’re dead, I’ll kill you and then love you afterward. (kissing her)"
Spike's desire to kill Buffy but with a sexual undertone that grows in love and admiration is specular to Othello's desire to kill Desdemona and his love and admiration for her.

In "School Hard" during their first fight, there are many sexual undertones:
-He talked about her menstrual cycle
-He said that weapons make him feel more manly
-He said that he will be quick and it doesn't hurt and she respond that it will hurt a lot

At the beginning of Season 2 Spike was the "Big Bad" with his woman Drusilla, but after he got injured and handicapped in a wheelchair Angel turned Angelus.
Angelus supplanted Spike's role as "Big Bad" stealing also his woman Drusilla.
In season 2 Angel, normally the "Good Vampire" died as a Villain/Big Bad
In season 7 Spike (now in a relationship with Buffy) takes the role of Angel. He now is another vampire with a soul prophesized for his main role in the Apocalypse.
Angel should use the amulet to destroy the First Evil's army and stay with Buffy; however, fate twisted and Spike took his role and Buffy choose him.
In season 7 Spike, normally the "Bad Vampire" died as a Hero with Buffy
As Angelus took away Spike's role of Villain and his woman Drusilla in Season 2 after Angel lost his soul; in Season 7 Spike took away Angel's role of Hero and his woman Buffy after Spike gained his soul

Love your analyses! Good catch on the "chop her into messes" line referencing Othello. I never realized that.
N

Buffy-Angel=Hercules-Xena
I have always compared these tv shows because I have seen similarities in the structures of the journey of heroes and characters. I think that the writers of BTVS and Angel took also many inspirations from Hercules and Xena as a tv show, not only in relation to a powerful female warrior figure like Xena as the main character but also in relation to the structure of characters and tv shows.
As a matter of fact, the writers and directors of Hercules and Xena (like many other writers and directors of movies and tv series) created their character in relation to the opposition Yang-Yin of the Chinese philosophy Taoism expressed in detail in the I Ching. 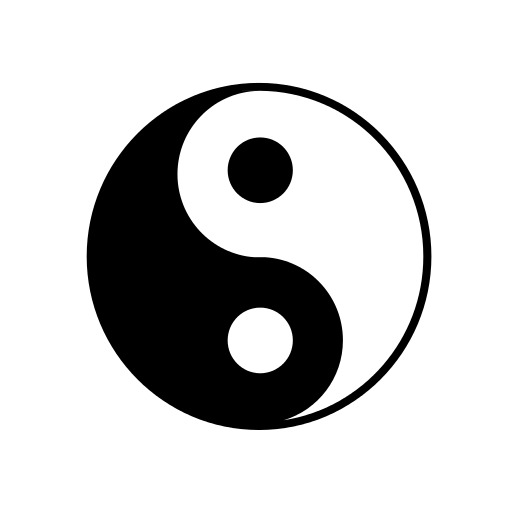 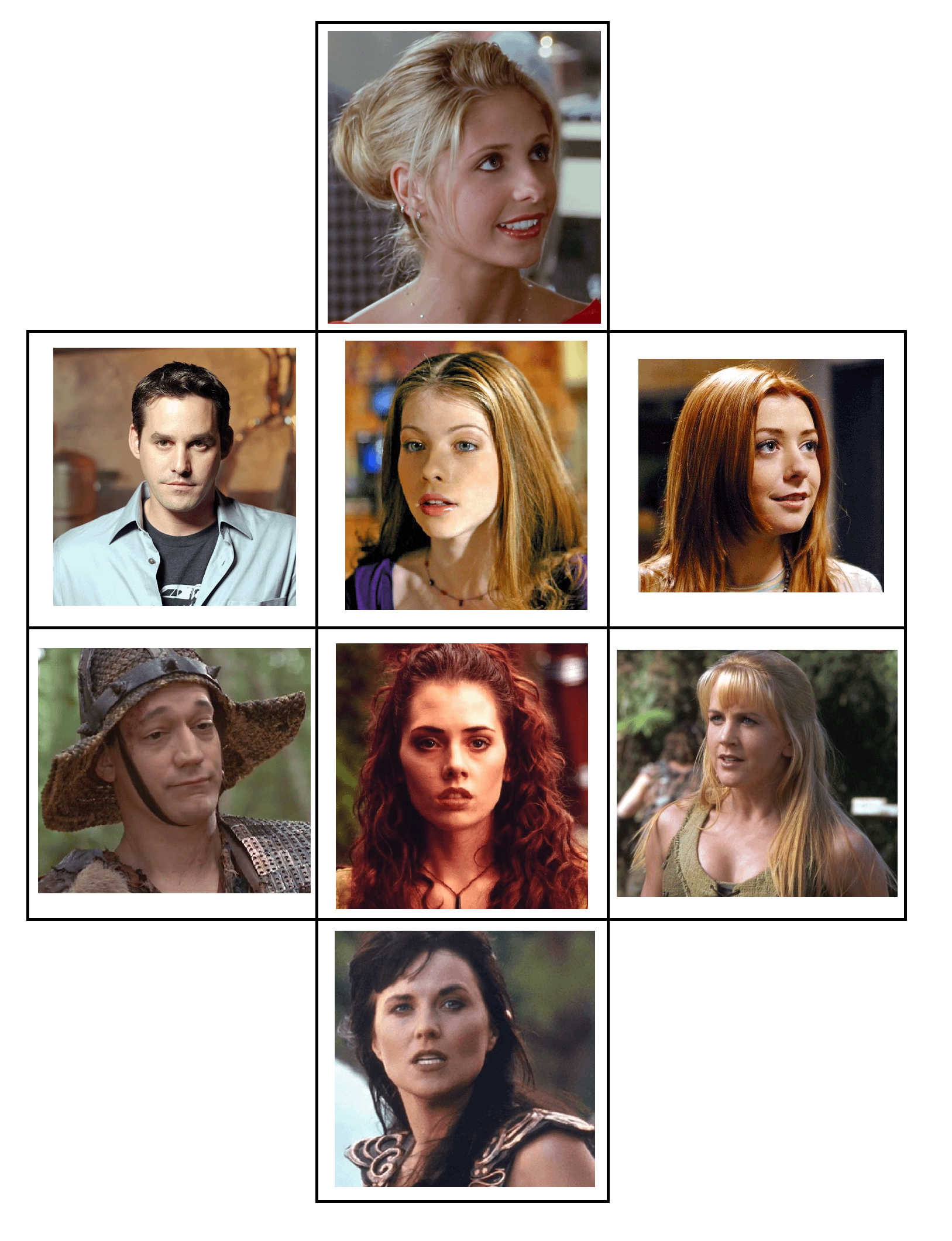 3) Ares and Callisto=Spike and Faith: The rivals
Buffy-Angel, Hercules-Xena, Spike-Faith, Ares-Callisto are similar and opposite in relation to Yang and Yin; as a matter of fact, their relationships are interconnected in different ways The basic relationships are:
However, it is also reversed:
Buffy (Good Girl/"Angel") and Faith (Bad Girl/"Demon") opposition based on the archetypes "Angel/Yang/Blonde-Demon/Yin/Dark" is similar but opposite to Callisto and Xena 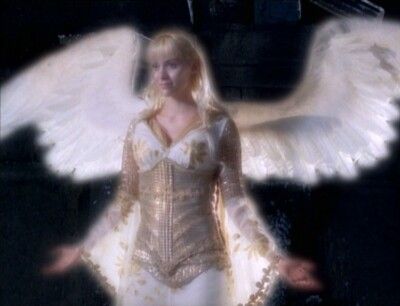 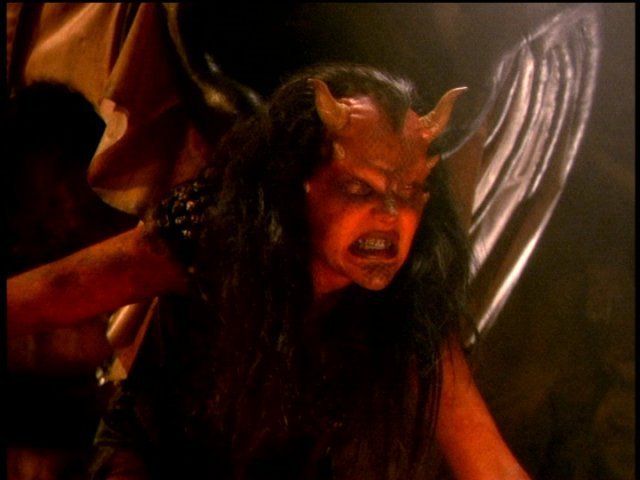 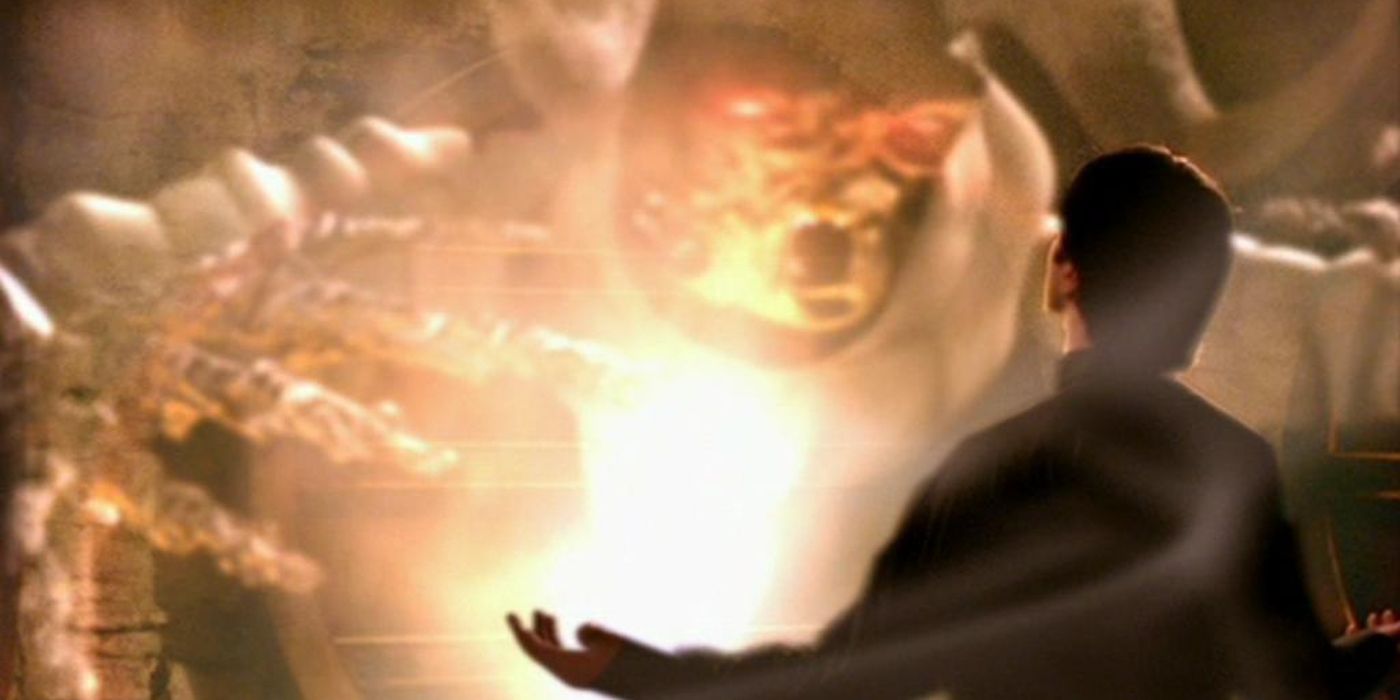 Both these entities are based on the Judeo-Christian concept of Satan, Dahak is based on Angra Mainyu/Ahriman, the principle of evil and destruction as opposed to Ahura Mazda (God) of Zoroastrianism, as a matter of fact, Hercules meets Zarathustra
The Judeo-Christian concept of Satan/Enemy of "God" was born from Zoroastrianism during the Persian rule of Hebrews after their liberation from the Babylonian exile of Nebuchadnezzar II with the victory of Cyrus the Great in the 6th century BC
Christianity developed from a Judaic set from Hebrews messianism, and originally Hebrews didn't have a Satan enemy of God; the ha-satan of the Hebrew Bible was sometimes an emissary of "God", after the syncretism and influences from Persian Zoroastrianism the Hebrews developed their concept of Satan.

Both in Buffy and Xena/Hercules First Evil and Dahak are linked to the Church: First Evil with Caleb, an ex-priest, and Dahak with his priest was trying to create the church of the only God after the fall of pagan deities

Personal opinion:
I think that the First Evil was lame, I didn't like the way it was represented. I can't think of that entity as "the principle of evil" and i also think that many people didn't take him seriously watching season 7. Instead, the depiction of Dahak in Hercules/Xena was one of the best depictions of "Satan/Evil Principle" I have seen in fiction (movies and tv series).
For example, in my opinion:
1) Caleb: yes, he was a good character and he was an effective scary villain but in the end, he was a misogynistic priest that everyone could understand that he had psychological problems when he talks about the Bible. Instead, the priests of Dahak were more astute in order to trick other people and gather followers of this "new religion".
Dahak himself posed as a parody of a messianic figure in order to fool people and these people unaware of his evil intentions loved and followed him. He created a false Church of the "only God of Light" with gospel chants as a parody of Christianity, and he was believable.
2) The First and Caleb operated principally in Sunnydale and they didn't do almost anything in the rest of the world (outside killing potentials). Instead, Dahak and his priest operated in all the world with people of different nations (Sumerian Mythology, Norse Mythology, Greek Mythology, and Celtic Mythology): He corrupted Gilgamesh, a demigod; he used Loki in order to start the Ragnarok; he killed the druids and accused Hercules in order to "demonize" him and used Cernunnos; he used Ares and others Greek Gods ran away from him. He impregnated Gabrielle and used Hope, their daughter against her. Dahak's presence influenced the whole world.
The way he mocked the real "God" posing as a priest of the light and a savior, his sarcasm and irony, the way he tried to corrupt people with good intentions during the depression for the death of loved ones, the way he took the body of Iolaus in order to torture emotionally Hercules, the way he tried to corrupt the innocent and naive Gabrielle in order to put her against Xena after impregnating her. He was a great character and a new and interesting depiction of "Satan/Evil Principle"
Also, the way the actor of Iolaus portrayed him and his relationship with Hercules reminded me of the Joker of Heath Ledger with Batman (another great character)