Black Thorn
Last week, news filtered out of SDCC that ‘Midnight, Texas’ writer, Monica Owusu-Breen, was working with Joss Whedon on a reboot of beloved series ‘Buffy The Vampire Slayer’. Now, Owusu-Breen has taken to Twitter to try and ease the minds of fans a little. It seems the word “reboot” in those initial reports might be misplaced…
This was her statement: 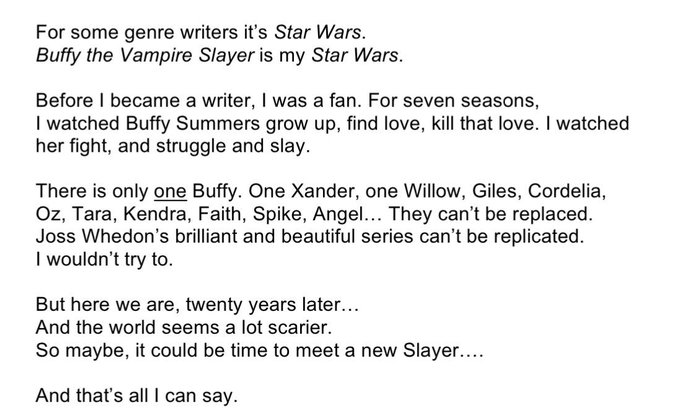 To us, here at Geektown, that’s sounding a lot more like a continuation of the Buffyverse, not a reboot of the original characters, which seems like an infinitely better idea. As you may remember, the show finished with the power of the Slayer being spread out across all the potential Slayers in the world. The Buffyverse was then continued in comic book form after the tv series ended, with the gang getting into various scrapes after the Slayers are marked as a terrorist group.However, we also know, at some point, the power of the Slayer seems to converge back again into one person. This is due to the Buffyverse title, Fray, which follows a Slayer set way further in the future. So it’s entirely possible to create a new show where the power has been reverted back into only being in one person. I mean… It’s even possible we could be getting a Fray series, but at this point, we just don’t know.

Assuming it isn’t a Fray series and is set in current time, this option, rather than an actual reboot, could allow for cameos from all the original cast to appear in the new show, should they wish to come back. As Buffy herself is actually outside of the Slayer line – due to her dying at the hands of The Master, then being revived – she could also appear. Faith though, being the actual Slayer in the Slayer line, might not be so lucky…

So there you have it. It looks like this is a new Buffyverse series, not an actual reboot of the original. The ‘[Insert name] The Vampire Slayer’ series is still in the early stages at the moment, but we’ll bring you more as we get it.

Black Thorn
That's good news, hopefully the stories will be different too, so same mythology but a whole new set of characters and stories

Spanky
It's not good news! I am seriously bummed.

Black Thorn
@Spanky this is a chance for them to get things right with characters, having another Willow with the same story, no thanks! Having a completely different character I'll give it a go

Black Thorn
I seriously am just gutted by this. Not even joking. I'm like. Damn. #sadface

nightshade said:
@Spanky this is a chance for them to get things right with characters, having another Willow with the same story, no thanks! Having a completely different character I'll give it a go
Click to expand...

I don't care now. It's not Buffy. I wanted a new Buffy done right. Not... whatever this is. I wanted them to fix Buffy.

fauxindigo
Get real. No food for you troll.

Spanky said:
I don't care now. It's not Buffy. I wanted a new Buffy done right. Not... whatever this is. I wanted them to fix Buffy.
Click to expand...

I understand what you mean, however what you see needing fixing, could be someone else's perfect moment, so no they were never going to do that, they couldn't change the characters that much or there would be too much outcry.

nightshade said:
they couldn't change the characters that much or there would be too much outcry.
Click to expand...

And that's the problem I have with it. I don't want them playing safe and then dropping cameos when ratings slump. I wanted a new Buffy story. With an African-American Buffy facing the problems of today.

Black Thorn
I'm hoping that it's a completely new telling of the story, starting with the new slayer being called, and not really even referencing the show we have seen. A clean slate so to speak

nightshade said:
I'm hoping that it's a completely new telling of the story, starting with the new slayer being called, and not really even referencing the show we have seen. A clean slate so to speak
Click to expand...

But they kinda have to reference it. There's a whole army of slayers out there. The Buffyverse has changed so much since the show went off the air. If they follow canon it just sounds like it could be a mess. If they retcon it, might be different. But they'd have to retcon the end of Chosen and not make 'every girl' who could be a slayer one.

It should be ONE GIRL (and that one girl should be Buffy)... the end of chosen changed that.

fauxindigo
It definitely shouldn't be ONE slayer. Buffy changed that a long time ago.

Black Thorn
No they don't they restart it from the beginning, so no need to think about the comics or tv show, it's a complete AU. Yes though only one slayer

Spanky
"it's a complete AU" I didn't take it as that.

Black Thorn
Oh it's sweeps week, let's see what original cast member we can get for a cheap cameo but just to get extra viewers. I really loathe the idea of it continuing.

nightshade
The AU is what I want!

Black Thorn
I don't want any cameos, if they have to get people from the original series involved then let it be behind the scenes, David can direct an episode or something! Or maybe you can just have someone singing off scene!

Spanky
You're going to get cameos. And you'll love the cameos because every Buffy fan wants cameos! Oh maybe if it lasts long enough we can get Buffy! oh, I hope Faith. James Marsters still looks good, he could show up. Clem!! Clem!! Sod off.

Sineya
A big sigh of relief! This is going to be Slayer: The Next Generation rather than some rehash of the original series. If so, they are going in the right direction. Trying to shoehorn new characters into the same old stories and inviting comparisons is not the way to go. They will be able to show stories for the generation that spends its life staring at a phone and feels the need to be connected to each other no matter what. The only hint we saw of this was when Buffy accidentally threatened Cordelia with a stake and she had to pull out her phone, pull out its antenna and call everyone she knew.

Black Thorn
Well, I’m pleased as I’m all for a continuation rather than a new ”Buffy” character. But good for them, generating this buzz.

Ethan Reigns
You want to reprise your role as one of Johnathan's bedwarmers?

I'm glad they're not trying to redo the original characters.

I think they might have new Buffy be college aged because it would give her the freedom of not having to hide things from parents. One of the side kicks would be her roommate.

I still find this statement very non-informative on whether it will actually be a reboot or a revival. Yes, she says all the other characters are unique and that she doesn't want to try to replicate what came before, but she could still start out with the same mythology as the initial show and just give the new slayer a different name...

Right now, I'm expecting some sort of spin-off though....which is okay, though it would bother me if all the original characters are mentioned but never seen and you only get characters like Andrew for guest spots, that already felt....strange in season five of Angel. Though I'm not opposed to the idea of them getting original Buffy stars like Sarah, Eliza, Aly onto the show. But that should not happen in the first season. If there is opportunity for guest spots, recurring roles, I think it should be later in its life and not in the first season where it should create its own identity.

But let's also keep in mind that there is no script yet, no network or streaming service attached, it is in development. It can still die in development like the Buffy movie reboot from a couple of years ago.

Sineya
Honestly I still feel like this show could be anything, that they can spin her statement to mean whatever they want it to mean lol

"Oh, I meant, I would be doing a totally different Buffy to SMG's Buffy when I said there was only one Buffy." lol

brinkster130
thats how I took it too.

Buffy Summers said:
"Oh, I meant, I would be doing a totally different Buffy to SMG's Buffy when I said there was only one Buffy." lol
Click to expand...

Boufay Summers. I love you. You have just given me hope anew. The sun shone down upon me. I can step away from the ledge and hope for a better tomorrow.
You must log in or register to reply here.
Share:
Facebook Twitter Reddit Pinterest Tumblr WhatsApp Email Link
Top Bottom