Black Thorn
What did you think about Nina? Should she have become more a part of the team, or was she around enough?

Black Thorn
She's my favorite love interest for Angel, so I like her quite a lot. I feel, with a S6, we would've gotten more of her. No clue if she shows up in the comics.

Sineya
I didn't like the actress so found it difficult to connect to her character to be honest!!!

Sineya
We had one werewolf story. What would be the point in having another unless it was to have Oz return and teach her to control the wolf within? But Seth Green was already headed into other projects so he couldn't be around for that and if he was, the story would have been about him and the most logical plot line would be for Oz to steal her from Angel. She was introduced too late in the series and there was still the overwhelming presence of Buffy in Angel's thoughts. I liked her, I just didn't think she fit into the story. If she had been a season earlier, there might have been a way to make it work.

I can think of plots and dialogs that I'd have found interesting. Fred & Wes learning the werewolves came from Primals who were persecuted so did a full moon ritual that took it further, that not only allowed them to actually take the form of wolves, but spread it to their enemies, turning enemies into converts. However, only around the full moon does the magic peak creating the wolf form, though as shown early on, the wolf is always present physically (Oz's ability to smell, for example, and wasn't he bit by a human infant to get it?) and psychologically, and with training no longer need the moon, and maybe this was deliberate to that their enemies who persecuted them would have to embrace their teachings to gain control over the Wolf, which at some level means accepting the Wolf within. (NOTE: the hyena spirits also allowed physical changes while retaining the human form as well, a link that could be explained in the show.)

Fred & Wes could work on a cure combining medical science (vs viruses) and the occult when Illyria happens, who couldn't care less about Nina, but makes some of her odd observations of the werewolf from a cellular level as they change, and either destroys Nina or takes command of her (recognizing Illyria as an alpha), or even just to flex a muscle cures her.

Lindsey could use magic to cause Nina to change unexpectedly as well, adding more reasons to hate him, especially if Nina is killed.

But so much else was going on that it would be a challenge to incorporate it (though I can think of a couple of episodes to eliminate for the most part to make room). Also, if Nina was the one who was killed rather than Drogyn (and that Angel faked a romance to fool the Black Thorn before doing so) would be a lot more dramatic to the audience...perhaps too much.

Giving Angel a girlfriend who didn't make him perfectly happy was probably the most mature thing the show ever did. And remember, the Network wanted more women cast on the show, girlfriend with a gimmick is the cheapest way of making that happen, aside from the A-Team, "Say hello to Girl, she's going to be traveling around with us, because reasons." Werewolves aren't overexposed either, I mean, by season five, we had spent five years of actors in period clothing debating the meaning of life, maybe having a few more stories about things that change you as you age, or about growing apart from your friends and family, or adjusting your expectations when life throws you a curve-ball. Like, Oz really left the show before lycanthropy affected his life in any way. Did Oz want to have kids? Did Oz start seeing other people as different from him? Can Oz give blood? Did the bestial began to affect the man? How does Oz fit in to werewolf society? How does Oz's family react? Those are all good questions that can't be answered with "Herbs and Tibet." So, Nina had some mileage in her. Also, the new Werewolf costume was totally worth it.

Nina was a promise never delivered, a story left untold, and a character left undeveloped. Whether you are a rabid Bangel or just a general fan of the show, how can anyone begrudge Angel the (almost) perfect few moments that she could give him? Buffy had multiple lovers, men who she genuinely cared for, who gave her at the least brief moments of respite from her practically never ending fight. You might not love Riley or Spike, but she did, in some fashion, and her character was enriched by those relationships. Who would really expect Angel to continue living like a monk? Let's face it, he let Cordy slip through his fingers, when she could have given him some much needed comfort on more than one occasion. Nina was Angel's last chance at having a little happy time (and God knows the broody ol' blood sucker could benefit from it!) Nina doesn't have to be the love of Angel's life, but she would make him a sweet little snuggle puppy girlfriend for in the mean time. Give the guy a break.

Sineya
It was great and well overdue for Angel, but I never saw it as true love, or her as part of the team. I prefer Nina on the sidelines, one out of the action, while still getting some action.

And if you don't like her, look at the bright side. Joss would have tried to top "A Hole in the World" at some point in season 6 or 7.

I liked Nina for what exactly what she was; a pretty, nice, smart girl who liked Angel and whom he could find companionship with and whom he genuinely liked. I thought their brief relationship was sweet and very good for Angel, given how angst-ridden all of his past relationships had been. He really does have a type though, huh? Also, it was nice to see him get some without worrying about going all evil. 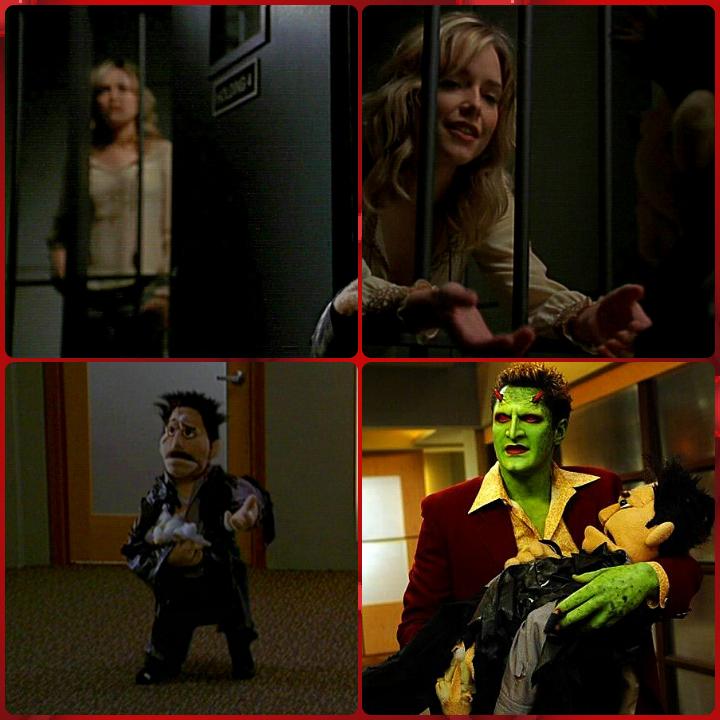