Rate The Last Book You Read #3

ItMustBeBunnies said:
He can get a bit much with the sex and gore sometimes for me. I have a pretty high threshold, but the way he describes things sometimes makes me feel a bit queasy. I can't deal with some of his fantasy books like Imajica, too dense and rambling. But Cabal, I love. Its the basis for the movie Nightbreed. Have you seen that? The theatrical version is good but the director's cut is more cohesive and closer to the book. And there is just something about Coldheart Canyon. I found it very engrossing and it stayed with me for awhile. It seems to be a book that people really like or absolutely hate, so I would be curious to hear your opinion on it
Click to expand...

My first experience of CB was a book on tape that seemed tame (all I can remember of it as I was 17-18 and mostly played it while doing housework is that it featured parallel worlds or dimensions that might, come to think of it, be adapted to Buffy easily enough)...and as luck would have it went from mostly boring to utterly gory as I was having lunch and I nearly puked it up. Which is especially remarkable given that by this time I'd helped field dress a deer (cutting out its organs after killing it) with little problem, so he really made it vivid for me. I think I read one or two more (I have memories of reading rather than listening anyway, but maybe it just an hour in a library, can't remember) but I can't remember what about.

ItMustBeBunnies said:
He can get a bit much with the sex and gore sometimes for me. I have a pretty high threshold, but the way he describes things sometimes makes me feel a bit queasy. I can't deal with some of his fantasy books like Imajica, too dense and rambling. But Cabal, I love. Its the basis for the movie Nightbreed. Have you seen that? The theatrical version is good but the director's cut is more cohesive and closer to the book. And there is just something about Coldheart Canyon. I found it very engrossing and it stayed with me for awhile. It seems to be a book that people really like or absolutely hate, so I would be curious to hear your opinion on it
Click to expand...

I can see what you mean. I think its interesting because he has a background of someone who himself was into S&M which makes him using it in horror more unique. I hear great things about Nightbreed. Never seen the film. I will search the book out.

ItMustBeBunnies
You should watch it. Barker directed it himself and David Cronenberg is in it :)

Black Thorn
My Sweet Audrina 500/5 - 495 for the male characters general existence.
Heaven - Stomped my heart into mush/unrateable. Perhaps I'll rate it one-hamster-incident-too much.
Dark Angel - sadly a lion mauled me and I am unable to rate this book as well.

All by V.C. Andrews, that gloriously twisted brain who distorts my own logic and whose views on relationships are, ehm, concerning to say the least. Wild rides. Now I feel like I need a hug, however, I no longer trust men or women enough to be hugged, because in V.C. Andrews everyone is awful and no one deserves your trust.

Sticky Fingers: The Life And Times Of Jann Wenner And Rolling Stone Magazine. By Joe Hagan.

A biography of the founder of Rolling Stone magazine. Lots of behind-the-scenes stories about the media industry and the music industry.

I Like to Watch: Arguing My Way Through the TV Revolution - Emily Nussbaum

Its a book of TV essays by a Pulitzer prize winning TV critic. I've read the opening introduction which is all about how she first fell in love with Buffy when watching The Pack of all episodes. She makes a brilliant argument about how Buffy was overlooked as low brow chick lit and The Sopranos (being more masculine) was seen as high culture. I like how she points out that Sopranos is actually a very funny show, and Buffy has the ability to break your heart. I'm already hooked! I think I'll binge this just like a modern TV boxset.

A book of interviews with film director Werner Herzog. Interesting if you are a fan of his movies. He talks in detail about some of the challenges of getting his films produced, shooting in remote locations, getting good performances from actors, his motivations for making each of his pictures etc. 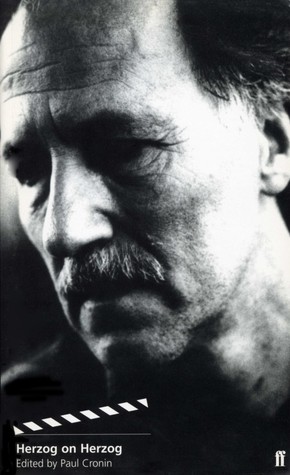 Spoils of War - Fay Weldon
This is a two book set and you have to read both. I've finished Before The War and am just starting After The Peace. I love Fay Weldon's style, she's always clever, funny and insightful. Her comments on the human condition and especially the plight of women in this world are always interesting. These novels are a family history, starting in 1922 and Weldon seems to be saying that we can never know who we really are or where we come from because history always hides the truth from us.

TriBel
OMG! I didn't know she was still alive! I haven't read anything by Weldon since the late 80s. Mentioning Jilly Cooper and Fay Weldon in one weekend's made me all nostalgic!

Easy book to read at work

I read this tonight in one sitting, based on the real life of the author and her experiences with fostering children.

And Another Thing by Eoin Colfer 2.5/5 - Nice to get more Arthur Dent, but it's not Douglas Adams

TriBel
Fancy joining me in a venture? We could start a publishing house with the sole purpose of bringing out books by dead writers. I'm calling it Ouija Board Press. :)

I am currently taking a walk down memory lane, reading (get ready for it)

"Tarzan: Conqueror Of Mars" by Will Murray

Now, before you get whiplash from rolling your eyes back and concussion from slapping yourself in the head, let me explain.

I discovered Edgar Rice Burroughs at the early age of 16, when his novels were having a new reprinting. Tarzan, of course, and John Carter of Mars are two of his most popular characters, and when I saw this on Amazon a couple of weeks ago, I just had to have it out of curiosity and pure nostalgia. Murray has been commissioned by Edgar Rice Burroughs, Inc to write a series of new stories about Tarzan, and, like so many millions of other fans of Burroughs over the years, has always wondered what a crossover between the Jungle Lord and the Warlord of Mars would be like. (I always envisioned it as somehow happening in Africa, but what the heck, a crossover is a crossover)

Just how Tarzan manages to find himself on Mars is accomplished within the canon of the two series, and the story, so far, has been interesting. Not great, but nostalgia is nostalgia, so I've got no real complaints so far. Anyone familiar with Burroughs work, I recommend it, though anyone new to the characters as they appeared in the original books may find themselves totally lost within the first few pages, and I would love to have a chat with you after you finish it. Murray'ss style isn't like Burroughs' own, but, considering that over a century separate the books, that's both understandable ane acceptable to me.

TriBel
In the nicest possible way, please stop talking about Tarzan. :) It makes me all nostalgic. Last time I read one of your posts I was left with the urge to re-read P.C.Wren's Beau Geste books. I haven't because I fear I can't go back! :)

Do It Like A Woman by Caroline Criado Perez, amazing and accessible feminist writing, highly recommend everyone to read (published 2015 so a little out of date now) 10/10

Now I really want to read her Invisible Women, anyone read it?

Black Thorn
Halloween Rain by Nancy Holder and Christopher Golden: 7/10
Okay so I wasn’t expecting as much buffy-speak as there was, some of it seems a bit off but overall it was pretty good, LOTS of pop culture references particularly for the X Files. I liked Samhain too! He was cool villain. Overall it was just enjoyable, I definitely want more Buffy books now.

Storm Front by Jim Butcher. I listened to it on audiobook for obvious reasons (read by Marsters) It's not really my sort of thing, but it was an easy listen, if a little old fashioned. Though I guess it's twenty years old now, I couldn't imagine a female police detective written as tearful at the scene of a crime nowadays. 5/10

Another memory lane novel. Brand was a western writer from back in the '30's through the '60's, when a hard working writer could publish as many as 150 novels a year by first having them published as serials in assorted pulp magazines. The stories are pretty much formula, same as the "B" western movies of the time. My grandfather was a big fan, and read this one to me when I was about 7 or 8. It's sort of a rip off of "Call Of The Wild," but with a happier ending. Fun, if you're into junk food for an occasional serving of brain, and run across it in a used book store.

TriBel
As I've said before, your posts evoke nostalgia. My dad used to read Max Brand and Zane Grey. : Hope you're all well. :)

An in-depth look at history of Television, looking at shows such as The Fugitive, Mad Men and Oz.

Their top 100 shows with a write up for each one. Plus there's a fascinating discussion/debate at the start with them trying to agree on what should be number one. At the end there's extra sections for sub-genres or shows currently on the air which one day could make such a list.

Mr Trick
Reading that at the moment also. Need to get back to it. My feelings are more mixed on it.

Buffy the Vampire Slayer and Philosophy 5/10
Academic in a way, but quite shallow e.g 'Was Buffy a Fascist' was a chapter heading. A slog to read and not very illuminating.

TriBel
I'm not overfond of those..."and Philosophy" books. They often work within a very rigid Anglo-American philosophical framework (which I personally find a bit boring). I prefer the Continental philosophers.

Priceless said:
Buffy the Vampire Slayer and Philosophy 5/10
Academic in a way, but quite shallow e.g 'Was Buffy a Fascist' was a chapter heading. A slog to read and not very illuminating.
Click to expand...

Oh I've seen this book and always wondered if it was worth reading. Guess not, ha! Yeah that "Was Buffy a Fascist?" chapter sounds like a classic example of an academic reaching and trying to sound hip and smart...