I like Neve Campbell but Kevin Williamson's hack writing and Wes Craven's cliched jump scare directing style really drag this one down. 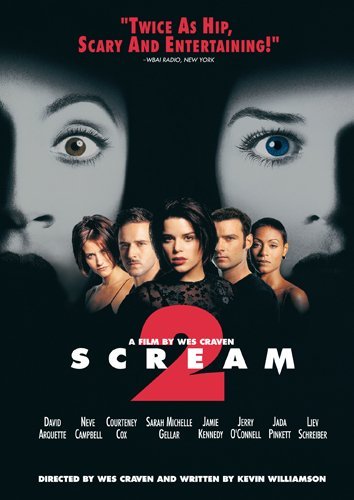 Mr Trick
Woah! That is a little harsh IMO.

Cruella (2021) 7.5/10
A really entertaining origin story. The casting is spot-on with Emma Stone making for a more punk rock and alternative Cruella. Her and Emma Thompson have good chemstry and spark off each other really well. The rest of the cast are good too, and the soundtrack of 1970s rock music is great too. There's a few clunky moments and its maybe a bit overlong. But really worth checking out and a good one to see in the cinema.

Bugger off, you brolly!

Entertaining and tense. I'm not sure if I like it better than the first one as its been awhile, but its a worthy sequel I think. A good one to see for my first trip back to the cinema in ages.

Dark and quirky. Not as good as I was hoping it would be though given what I had heard about it. I think it might be the last movie Anton Yelchin filmed. His character is so pathetic, but he gave a good performance.

I've been meaning to watch this for awhile. Underwhelming but entertaining. It was interesting the way they spliced in the interview footage of the real people whom the movie is based on.

Sineya
Cruella-7/10
I'm so happy to be finally going back to the movie theaters again! I wasn't hyped for this, but I heard good things and I like Emma Stone and Emma Thompson and wanted to see what they would do with this reimagining/origin story for Cruella De Vil. This was a solid movie, I don't like it as much as say the live action Aladdin or Beauty and the Beast, but it's a good flick, I'll watch it again. The cast is great! The Emma's are amazing, I like seeing Emma Thompson as a villain and the supporting characters work well too. Anita Darling and Roger do feel a bit shoehorned in, because they don't really do much. There are some sad moments that make you empathize with Cruella a bit, but she does go off the rails and a bit mad. The ending definitely sets up where 101 Dalmatians starts, which is kind of pandering.

I love the 1970's London setting and the music is great. Really the style of the movie carries the film. Although, I think the director didn't do a great job with the 70's punk London scene, it could have been filmed more stylized, but it still works.

Yeah, I agree. The beginning and middle drag on a bit too long.

Inland Empire - 7
I think I liked it, although not entirely sure why or what I liked ! This was strange even for a David Lynch film. But it definitely makes you think and feel, Laura Dern is amazing and I love how he got Naomi Watts to turn up just to sit in a bunny costume

Heavy - 7
Moving slice of life film. James Mangold has quietly built up an interesting filmography, and as a music fan how could I not like a film starring Evan Dando and Debby Harry

Mr Trick
Yeah its full blown Lynch and all the better for it IMO.

I didn’t have high expectations for this film but I really enjoyed the message and I think everything worked towards the message which always makes for a strong film.
Raya and Numaari’s relationship made this whole film. I’m really glad I liked this one because Soul was bad.

The Skull (1965) 7/10
Bonkers b-movie which in end was kinda trippy and eerie (if very silly). Peter Cushing and Christopher Lee would sell it to be even if they reading the phonebook.

HowiMetdaSlayer
is that the one with the flying skull?

Second Chance (1953) 6/10
Solid romance/thriller with Robert Mitchum, Jack Palance and Linda Darnell. Nothing too much happened for most of the film, but its worth it for the dramatic ending with the cable car.

Can't really rate it as I had it on the in the background more than actual watching, but yes I still very much love seeing Snape in it.

@HowiMetdaSlayer I think so, but to be fair there's probably more than one film with a flying skull Its the one with the Marquis de Sade's Skull which nobody seems to want to throw away even though its clearly dangerous

A Quiet Place Part 2 - 8/10
A very satsifying sequel. Switching the focus to the Milicent Simmonds character was a smart choice.

HowiMetdaSlayer
actually think it was the screaming skull?

The Conjuring (Re-Watch) - 8.5/10
Such a good film. Love James Wan's direction and the old school haunted house feel he brings to the film. Genuinely creepy and atmospheric and I love the family dynamic at the heart of the haunting. And, of course, Vera Farmiger and Patrick Wilson as the Warrens, they're amazing.

The Conjuring 2 (Re-Watch) - 8/10
I used to like this one more than the original, but this time around it fell just shy for me. Still a great movie, spooky, creepy and very reminiscent of possession films, even though it's classed as a haunting. Great cast and fun story, with some great practical effects and an effectively malevolent villain.

The Conjuring: The Devil Made Me Do It - 6.5/10
Not terrible but definitely not as good as the first two. This one felt more like a supernatural murder mystery than a haunting or a possession and wasn't particularly scary. I also wish we'd had more interaction between the Warrens and the targeted family, but still an entertaining film, with fun scenes and great performances as always from Farmiger and Wilson.

Mr Trick
Might have catch up with these myself then check out the new one. Only seen first one.

As much as I like Noble it ruined any "suspense" by having him in the role. The minute you saw him you knew what was up. And for once, the actual true story (which they just glossed over) was worse than the movie about it.

American Animals (2018) - Self involved, bored and entitled boys commit a ridiculous crime that had no chance of success. Really aggravating film. Even Peters is in his mid 30's and I wish he'd take roles that reflect his age 6/10

Mr Trick
That's fair. It was my concern going in, but I guess the film was just so well plotted and involving than it didn't matter. Also I think that is part of the point of the film. By the end they do kinda get what's coming to them.

Mr Trick That's fair. It was my concern going in, but I guess the film was just so well plotted and involving than it didn't matter. Also I think that is part of the point of the film. By the end they do kinda get what's coming to them.

Yes they served their time and BJ, the librarian, was okay. It just felt like they had so much going for them and they threw it away on a stupid scheme. I really liked when the real Warren Lipka says he wanted to be different and he realises they weren't different or special. The film was well made and well written, but I didn't like any of the characters 🙁

Sineya
Zodiac (2007) - 6.5/10
Finally got around to seeing this David Fincher thriller. It has a really good cast, as soon as I saw John Carol Lynch I knew he was the killer, although the movie (and maybe real life) suggests that it might not have been him. It wasn't a pure thriller like I was hoping for, it was more about the investigation of who the killer is. Mark Ruffalo was really good in this, the supporting cast was great, and I liked Jake Gyllenhaal. Robert Downey, Jr. was well, Robert Downey, Jr. which was kind of a disappointing performance. Also, as the movie goes on, it jumps years at a time, and it kind of gets a bit confusing trying to keep track of when events happened. The movie also brings up some key suspects near the end, but then completely drops them. It's still a good movie though, if a tad bit long.

Mr Trick
Say what! Its a great film.

thetopher
I really love this film but I understand your rating. True-Fiction movies can be tricky to get right. :)

Ghost Boy
6.5 is about right, Fincher is overrated IMO.