Black Thorn
What are you top 5 episodes for Buffy and Spike?

I'm going to have a think and come back to this, but I know Fool for Love is probably number 1.

Sineya
1. Dead Things - the balcony scene is one of the greatest scenes on television and so hot. The balcony scene I could literally re watch over and over. this episode has filled with amazing Spuffy scene.
2. Touched - beautiful representation of their love through the speech and amazing chemistry .
3. Smashed - Spuffy finally consummating and breaking the house down in sexual glory is still amazing to this day!
4. Intervention - a real beautiful episode for them where they share their first kiss and the real potential of Spuffy is shown
5. Chosen - a heartbreaker but the Spuffy sacrifice has to make the top 5. Spike showing complete love and devotion for Buffy is amazing

S
Spanky
Ha. This is so funny. This thread lured you out of hiding.

1. Becoming - it was so unexpected to having Spike align himself with Buffy instead of Drusilla & Angelus. I love their convo by the police car "... The whole Earth may be sucked into hell, and you want my help 'cause your girlfriend's a big ho? Well, let me take this opportunity to *not* care!", and Spike being there when Buffy tells her mom she's the slayer... "Spike and I... are in a band"
2. Something Blue - I devour every second of them being betrothed- some of the most hilarious lines between them in this episode, even before the spell kicks in "Giles! I killed Spike. That's okay, right?!"
3. Crush - even though he's a soulless obsessed creep, his love/fixation for Buffy seems genuine, and I love having Harmony & Dru there in contrast
4. Fool for Love- even just for the very ending alone when he stops himself from killing her and just comforts her instead.
5. Once More with Feeling- Rest in Peace is perfection as is the ending where he stops her from combusting and sings so beautifully, and then the ending of course where they share a very magical kiss with the rising music.

Fool for Love - I love the whole episode with the flashbacks, the fighting between Spike and Nikki/Buffy, but mostly... That end sceeeene!!!!
Intervention - The Buffybot is funny! You could argue that it's disgusting having a sex-bot, but I was 9 when I first saw it and I just thought it was hilarious, I guess that stuck with me. And the ending... "What you did for Dawn, and me. That was real. I won't forget it."
Crush - Spike first tells Buffy that he loves her. Plus I loved seeing Dru again.
Something Blue - Hilarious!!! Love this episode. Their wedding plans, how Buffy tell Riley that she is going to marry Spike and that he is old, not as old as her former boyfriend, but old. 😂 This episode is awesome!
.... Those are already 5... I don't care!
Beneath you - Spike: "Why does a man do what he mustn't? For her. To be hers. To be the kind of man who would never... To be a kind of man. And she shall look on him with forgiveness... and everybody will forgive and love. And he will be loved. So everything's okay, right? Can we rest now? Buffy? Can we rest?" Oh god this scene!!!
Dead Things - I love that episode! There're a lot of great Spuffy scenes in it. I love how the guilt Buffy feels for "killing" (or better thinking she killed) Katrina, she just lets it out on Spike and Spike lets her do it, because he loves her and knows that she needs a "whipping boy" or else she'd go to the police and destroy her own life. (I think that's what he means when he says: "Come on, that's it, put it on me. Put it all on me.") Probably not really healthy, but good in that situation I guess. She would have gone to the police and had been arrested for a murder she didn't commit. (Obviously all of that is only my interpretation.)
Also the "Do you even like me?" "Sometimes." Is great! But still season 7 is my favourite Spuffy season. In season 7 she's treating him better than in most of season 6.
After Life - This scene when Spike first sees Buffy!!! And those quotes: Spike: "But I want you to know I did save you. Not when it counted, of course, but, after that. Every night after that."
Buffy: "How long was I gone?" Spike: "Hundred and forty-seven days yesterday. Uh... hundred and forty-eight today. 'Cept today doesn't count, does it?"
Showtime -

Do I have to say anything more?
Never Leave Me -
Buffy: "You faced the monster inside of you and you fought back. You risked everything to be a better man. And you can be. You are. You may not see it, but I do. I do. I believe in you, Spike."
Once More With Feeling -

Chosen - Buffy finally admits it!!! "I love you." "No you don't. But thanks for saying it." And the Hands chatching fire! It's beautiful, but sad.

And there are still soo many more!!! I am so sorry, I can't choose I love them all (and more) if it's something I'm really passionate about (for example also Willow/Tara or the Buffyverse in general it always ends like this. I love everything about it. I can't choose!) I probably forgot other good ones. Can I come back here and name more later? Or am I a bad, bad person because I already said more than 5 and so I can defenitely not name more?
Last edited: Jul 28, 2018

fauxindigo
I think we can forgive you. I really wanted to list AfterLife & Intervention but I played by the rules. ;)

This was tough as hell. In no particular order : 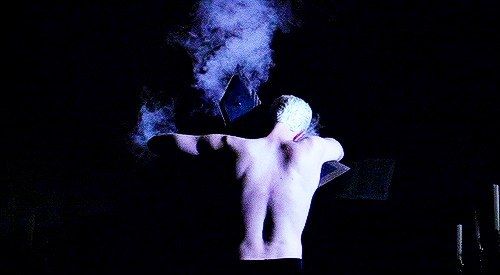 Black Thorn
As far as best episodes that feature Buffy and Spike interacting, that'd be a much different list. For now, I'll stick to episodes with the best Spike/Buffy moments/scenes in them

5. Something Blue - I mean, do I really need to clarify here? It's so funny and ridiculous and iconic, the whole episode really.
4. Fool For Love - The whole episode is amazing, but I put it here mostly for that last scene on the back porch. Very little dialogue but so much heart.
3. Becoming Pt. II - Pre-Spuffy Spuffy is just as much fun to watch happen, just in a different way
2. Touched - That speech. Nough said.
1. The Gift - Buffy and Spike are both really great in this episode, together and apart, but that scene in the Summers home really nails it for me.

1 - Fool For Love - Just a great end scene
2 - The Gift - Buffy has some kind of respect or trust to make Spike a promise to protect Dawn
3 - Touched - Always been amazed by the Spuffy scenes since I first saw it
4 - Smashed - Great end, fight with dialogue and a wonderful score
5 - Becoming Part 2 - Spuffy become allies, I don't think they would have been together later if Spike didn't make a deal with Buffy in this episode

Very hard to narrow it down..I'd say these are the ones I go back to often


HM: Beneath You, Intervention, Dead Things, Chosen, and Something Blue

Fool for Love: the chemistry and UST is palpable between Spike and Buffy and of course the ending where Spike comforts Buffy and she lets him

Serial: where we see the beginning of a real friendship between the two but there is tension was crackling under the surface. I love when Buffy is hanging out in his crypt drinking together and the way he looks at her

Touched: the speech and the holding and gazing at each other for the ages. It’s such a contrast to everyone else and it’s beautiful

Showtime/Chosen: I know cheeky. The end of showtime the look Buffy gives Spike. It’s obvious she loves him here. Chosen the fade to black mystery scene and the love declaration and flaming hands which is so romantic
K

Fool for Love is a bit of both

Sineya
Purely for Spuffy and not necessarily the merit of the entire episode in each case, I'd say (and this might change any given moment):

Hon mentions: Dead Things, Once More With Feeling, Never Leave Me, Entropy (I think it's underrated for that last moment between Buffy and Spike, the acting is very sensitive and shows how they're both conflicted/ hurting), Tabula Rasa, Potential, Intervention, Out of My Mind, Him, Family, The Gift, Chosen (and on and on and on lol.)

1-) Something blue
This is my favorite episode on the whole show.And I love their every moment.They arguing and their scenes where they under a spell was hilarous.