Black Thorn
Can someone do a basic text tutorial for me, things like outlining text, shadowing, mirroring etc, I never know what to do with text and getting a better understanding of all the different things might help me use it more.

Black Thorn
I'm not entirely sure how to do a tutorial, but I'm sure someone else, like Taake, will know

nightshade
It's a walk through of what you do, with screenshots

Text and images Copyright (C) 2002 Jens Lautenbacher and may not be used without permission of the author. Intention¶ On this page, the first section of our ever growing (?) collection of tutorials, I will demonstrate the basic operation you will need to perform over and over again in your life ...

How to Install Fonts in GIMP | Davies Media Design

In this GIMP tutorial how-to article, I show you how to install fonts in GIMP using GIMP 2.10. Install any third-party font easily by following these steps!

Archive of freely downloadable fonts. Browse by alphabetical listing, by style, by author or by popularity.

Black Thorn
I have loads of fonts and can do the basics, it's the fancy stuff I don't know.

@Puppet thanks, it's just making text look less flat and 2D, if that makes sense

Puppet
Let me give this tutorial business a try

Black Thorn
Alright, here we go. Here's how I do my usual texting on banners (I might do another one later for a different kind of effect for texting that I use less often).

We start by getting our banner ready, of course. 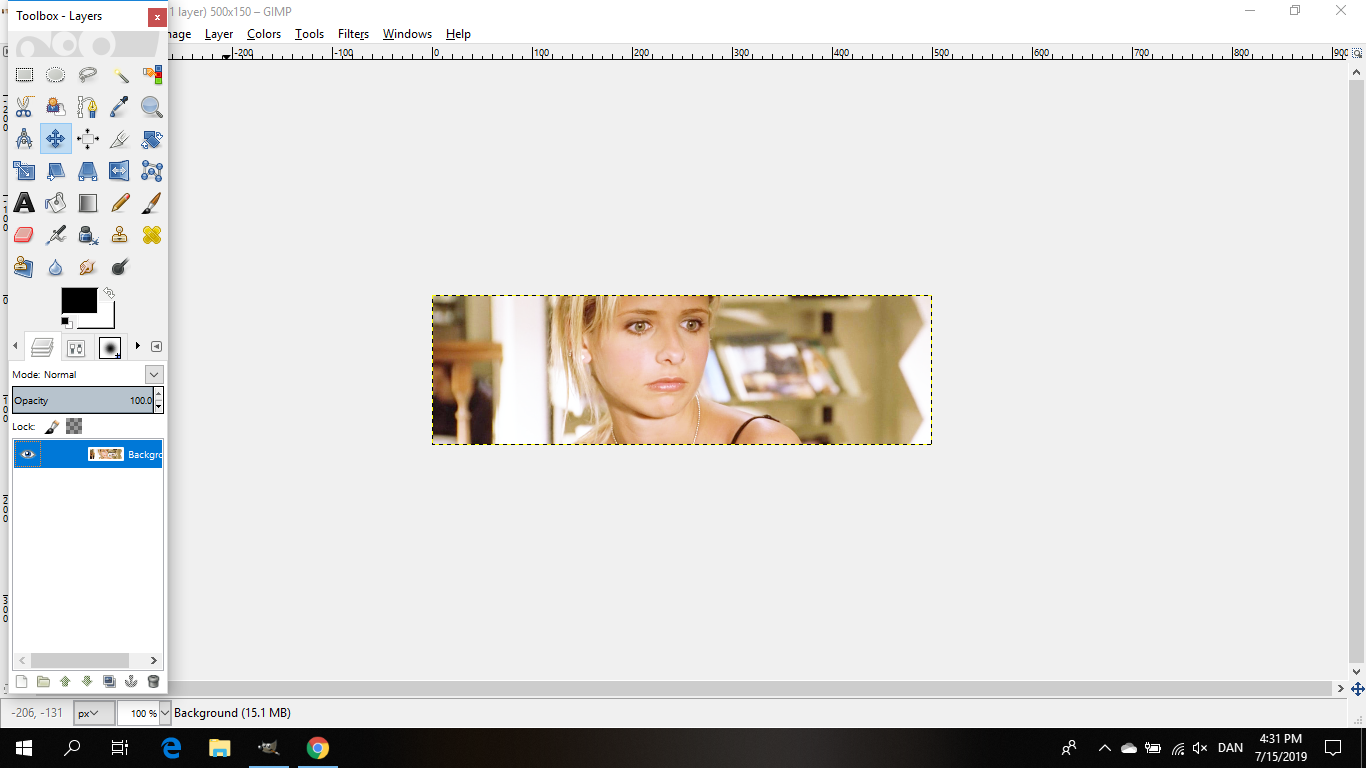 We go to text, write what we want it to say and pick the font we want 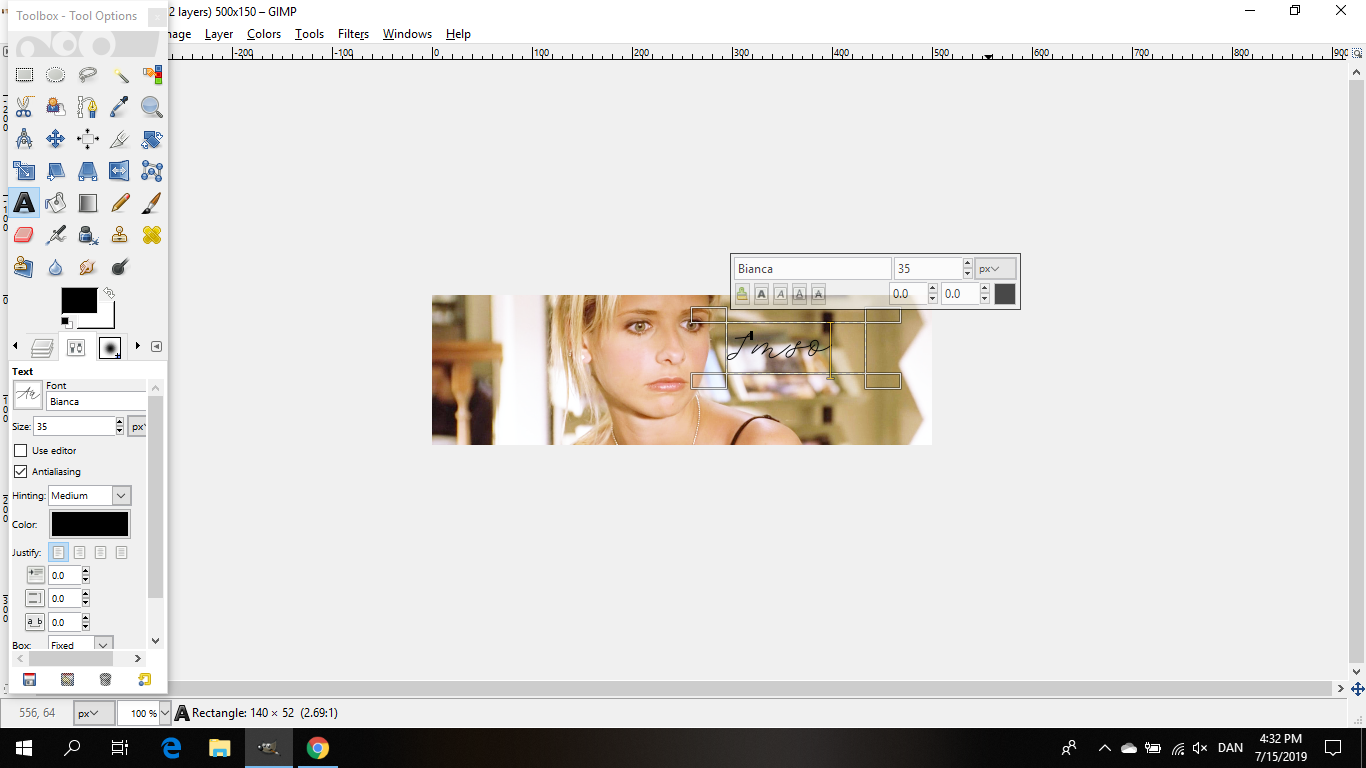 From now on I've made the image bigger so you can see better. I personally like to use different fonts for the words to create an importance in the sentence 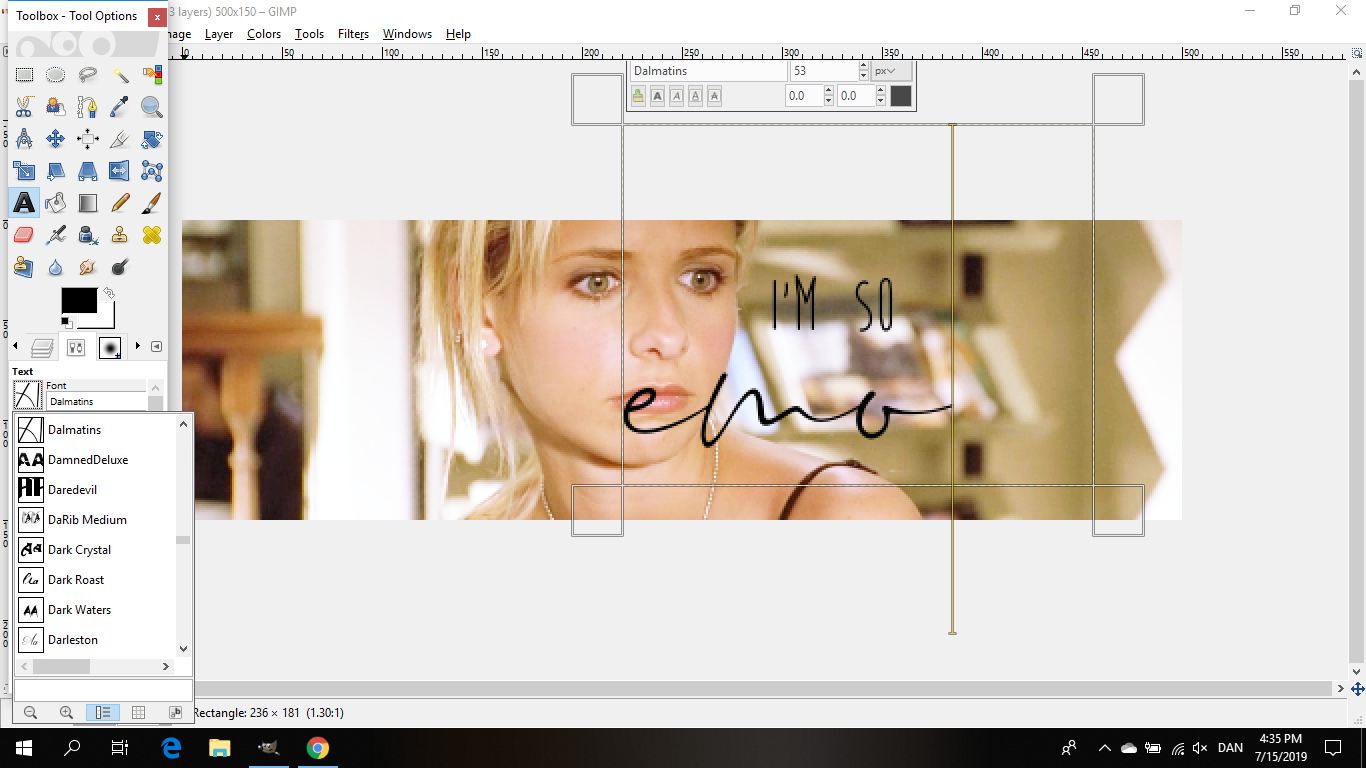 When you've got the fonts how you want them and the size you want them, it's time to layer them to fit the bg image 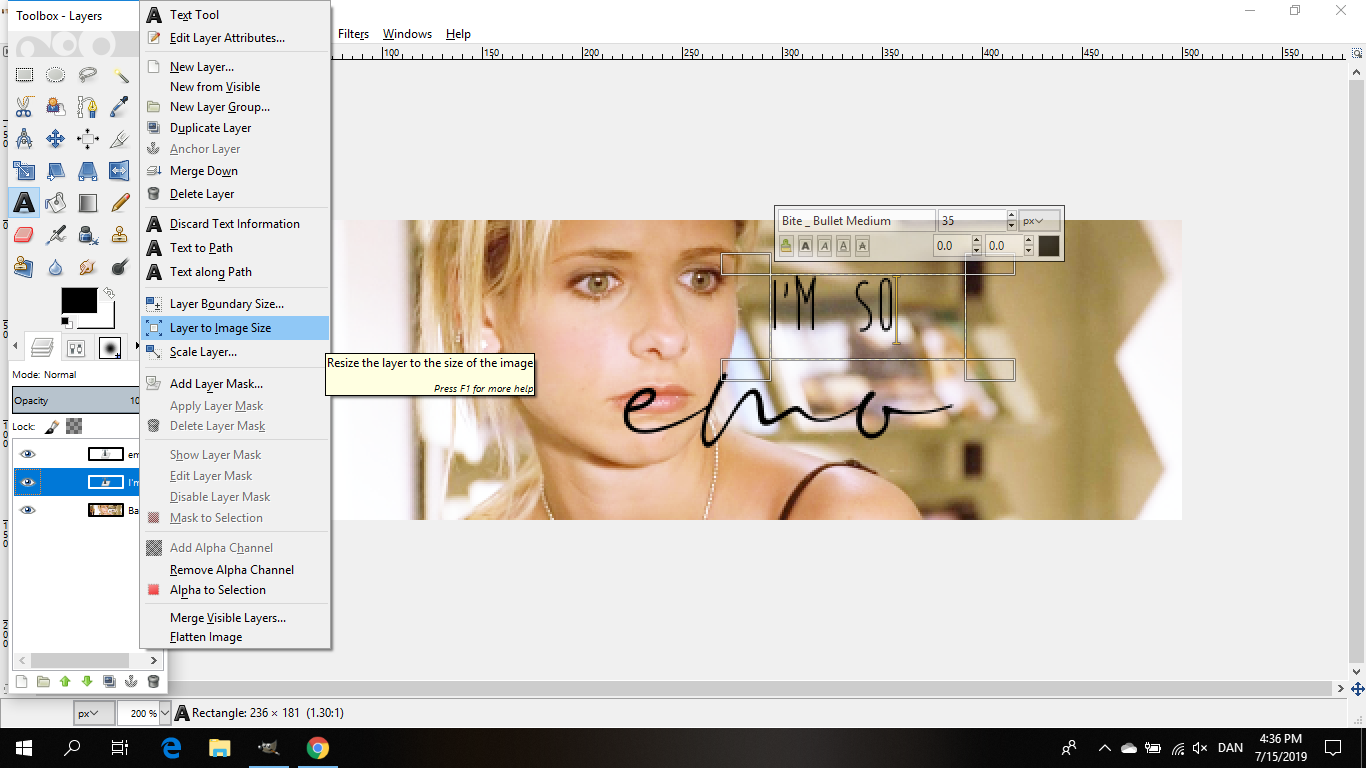 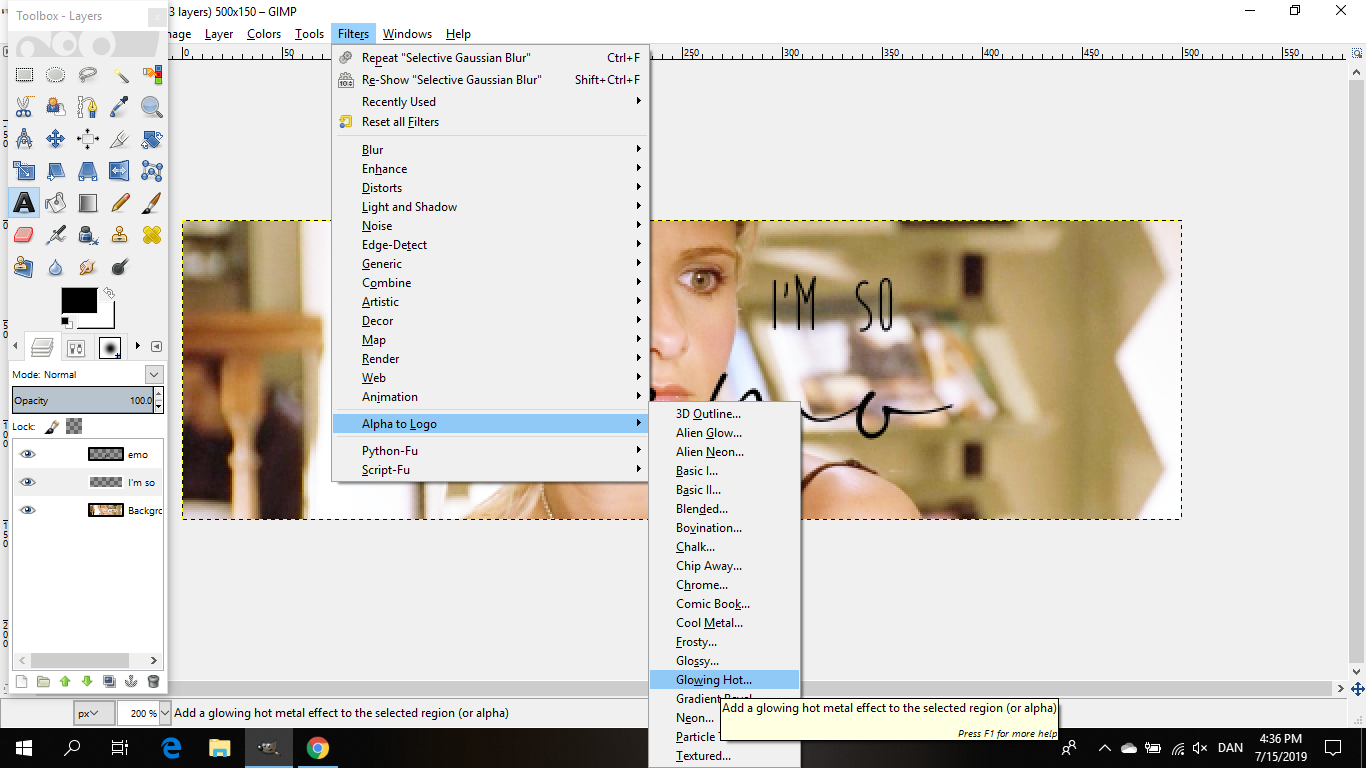 What this does is leave your text with an orange glow (we can change the color later) and you can choose how big that outline/glow should be. For simple text I stick to somewhere between 1-5, all depending on what you want. You can play around with it 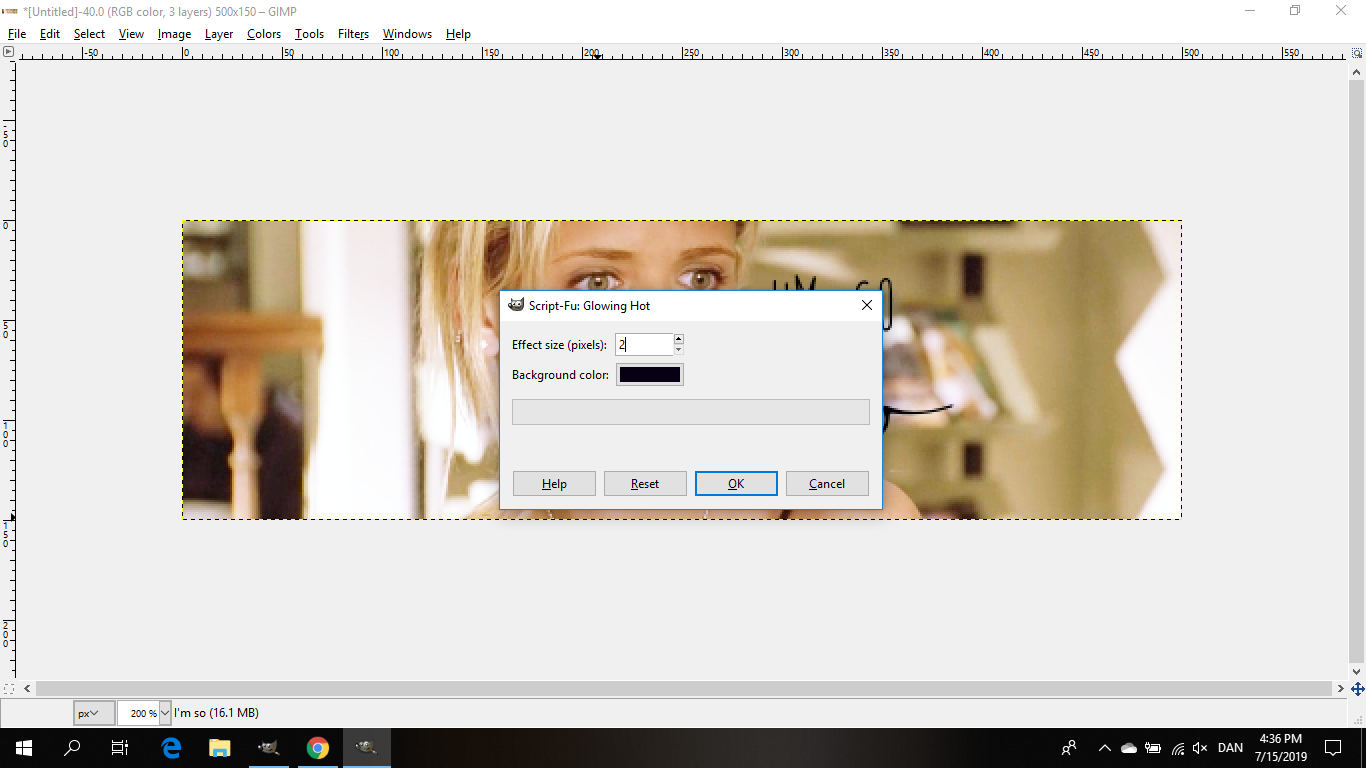 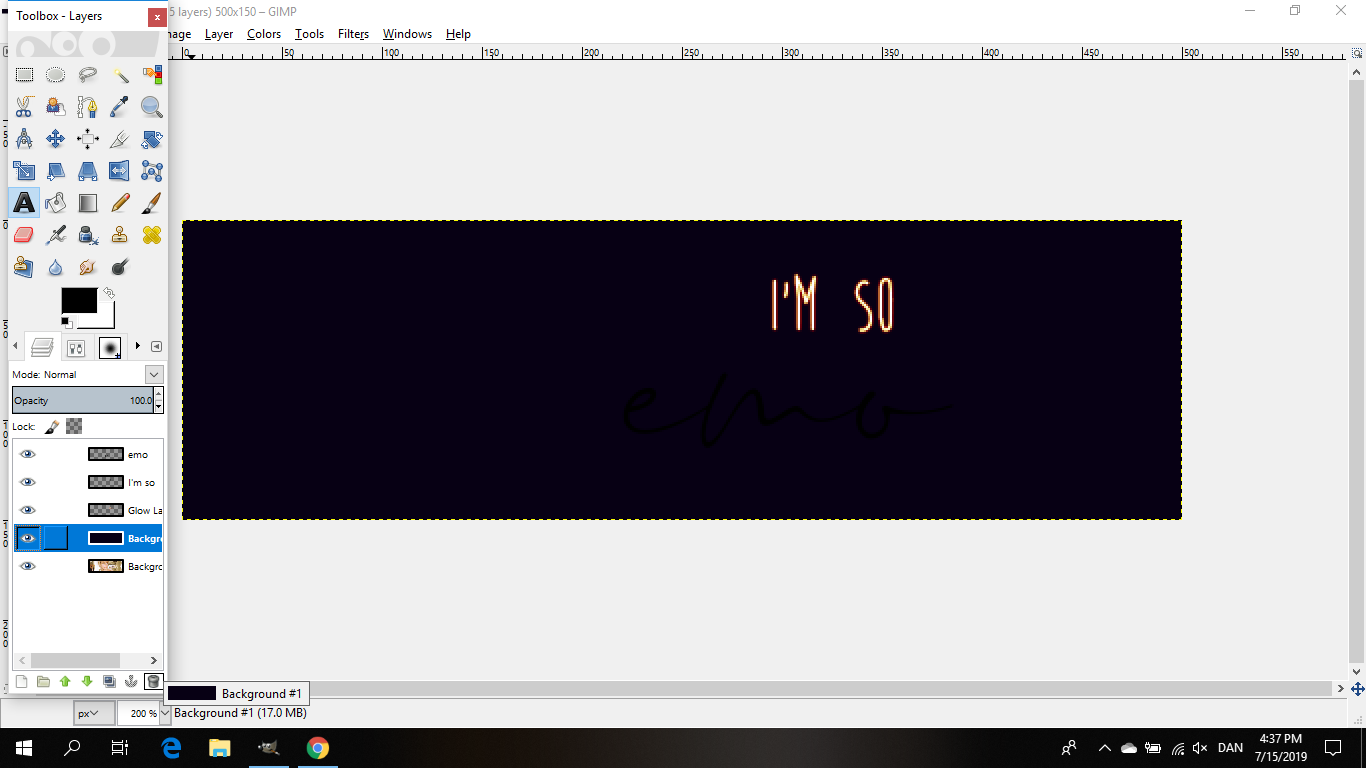 Delete the BG layer and now you have 2 layers with the same text; I sometimes erase the 'I'm so' layer', leaving just the Glow layer behind, but not always, so for this tutorial I've left them both around. Which is why we now merge I'm so down into Glow layer 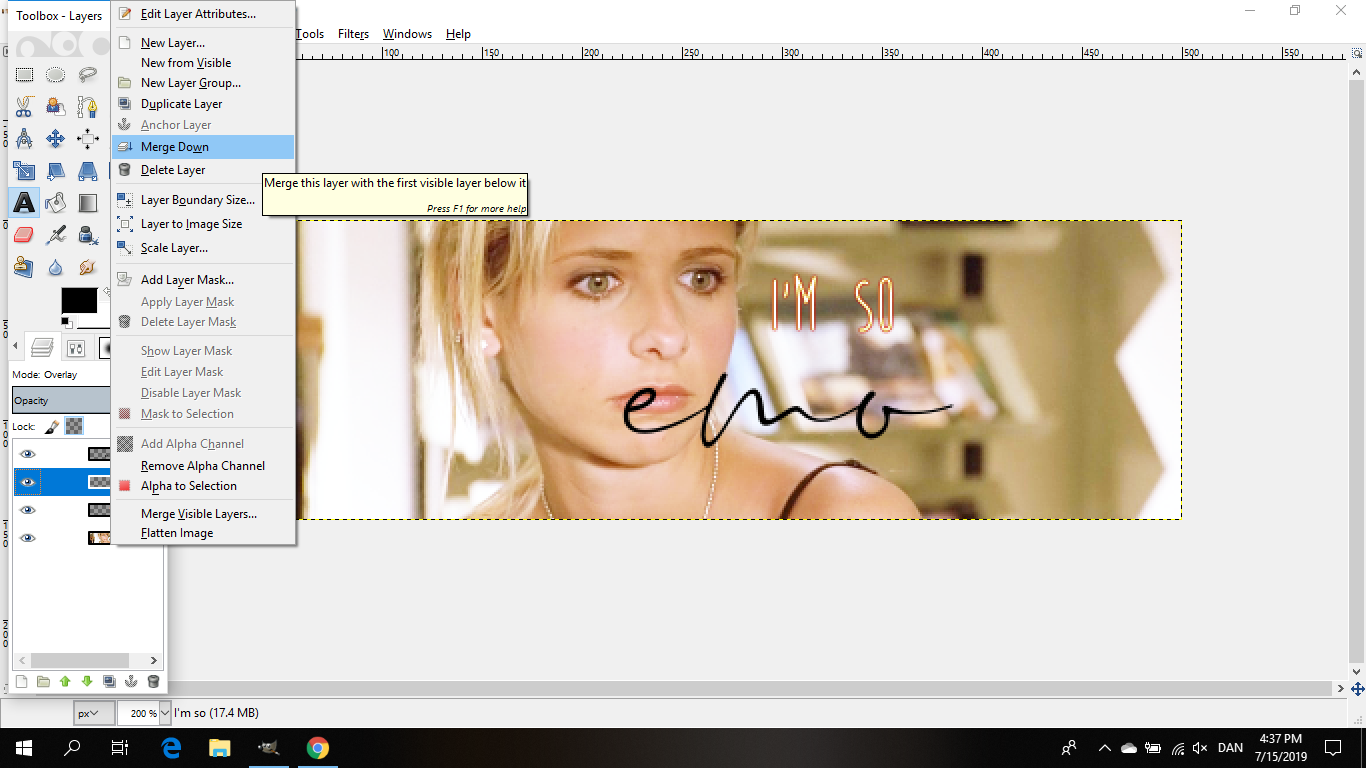 We do the same exact thing with the emo layer. Then, we go into colors to change the color of the glow 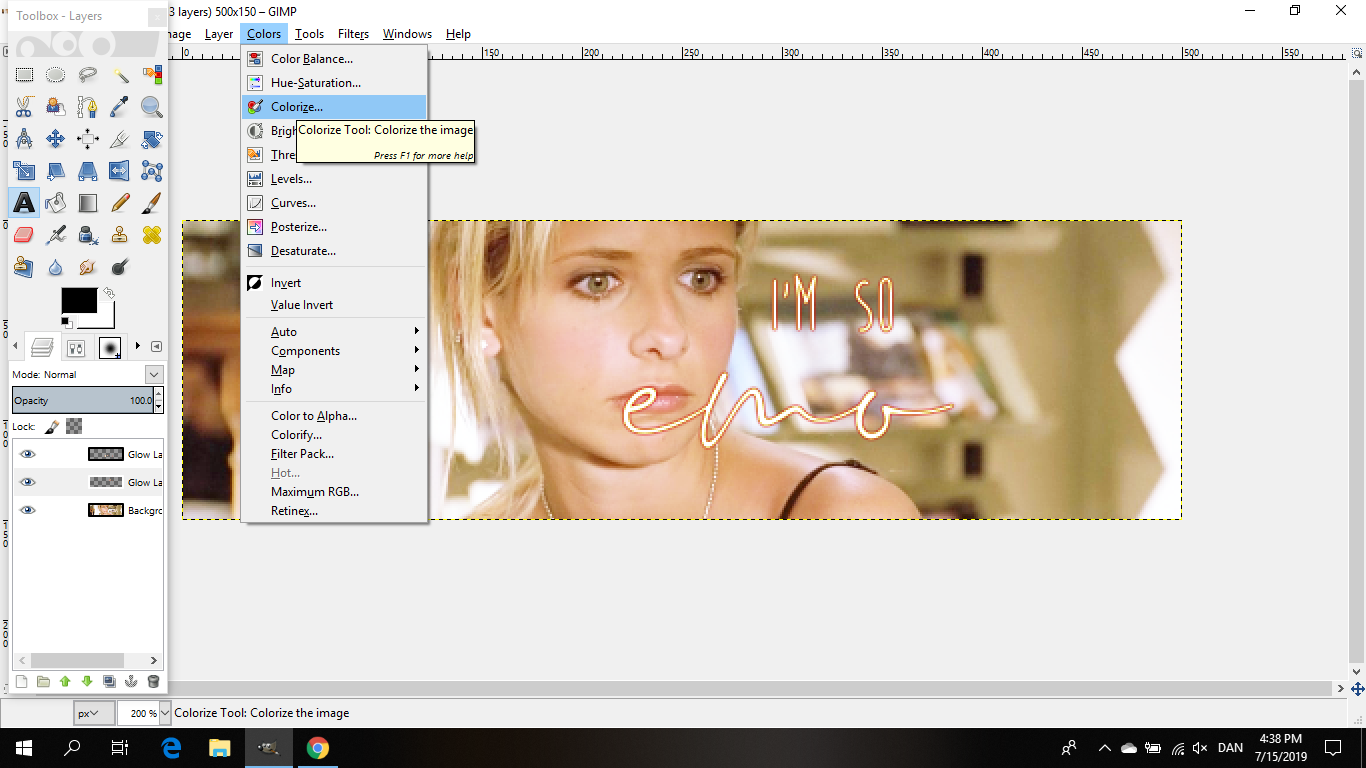 Again, you can play around with the colors, see what you like best 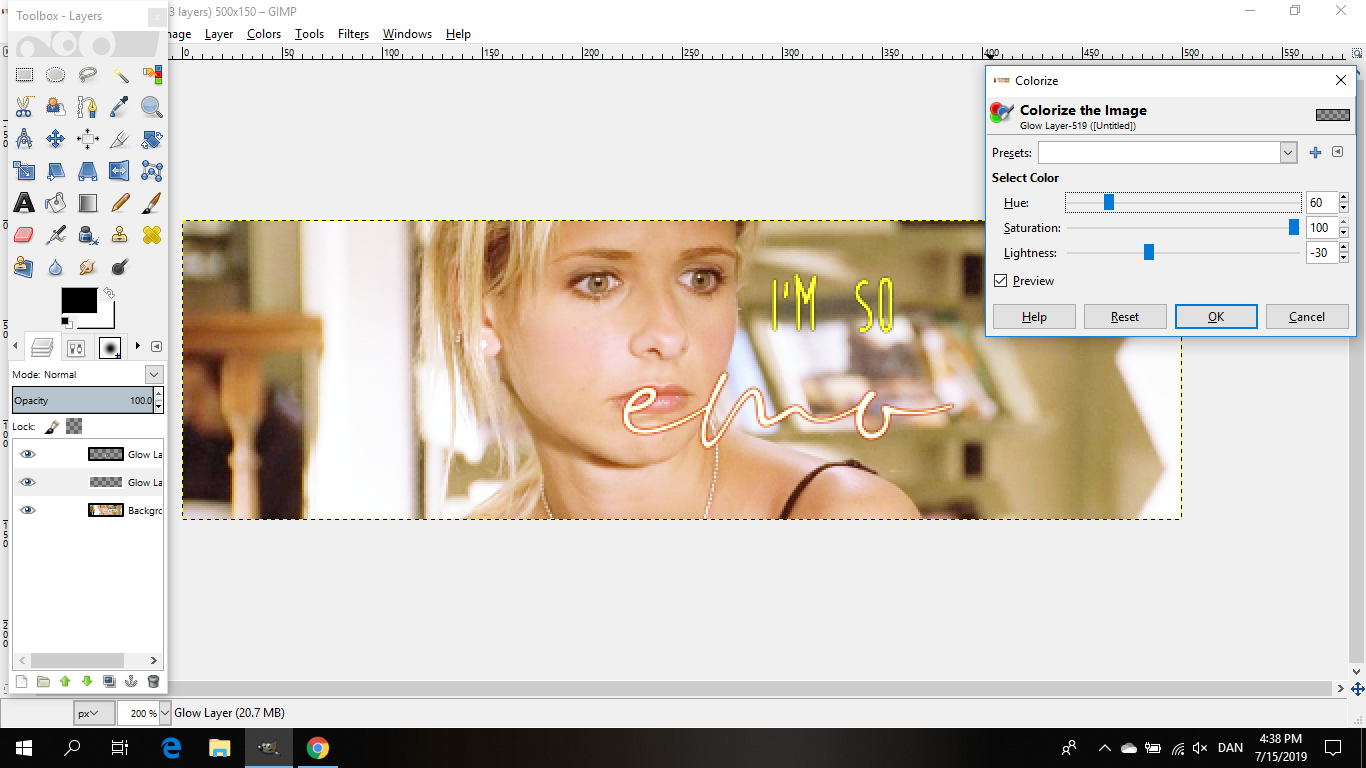 Again, we do the same for the emo layer, and again, I like to use different yet similar shades, in this case I've used yellow and orange 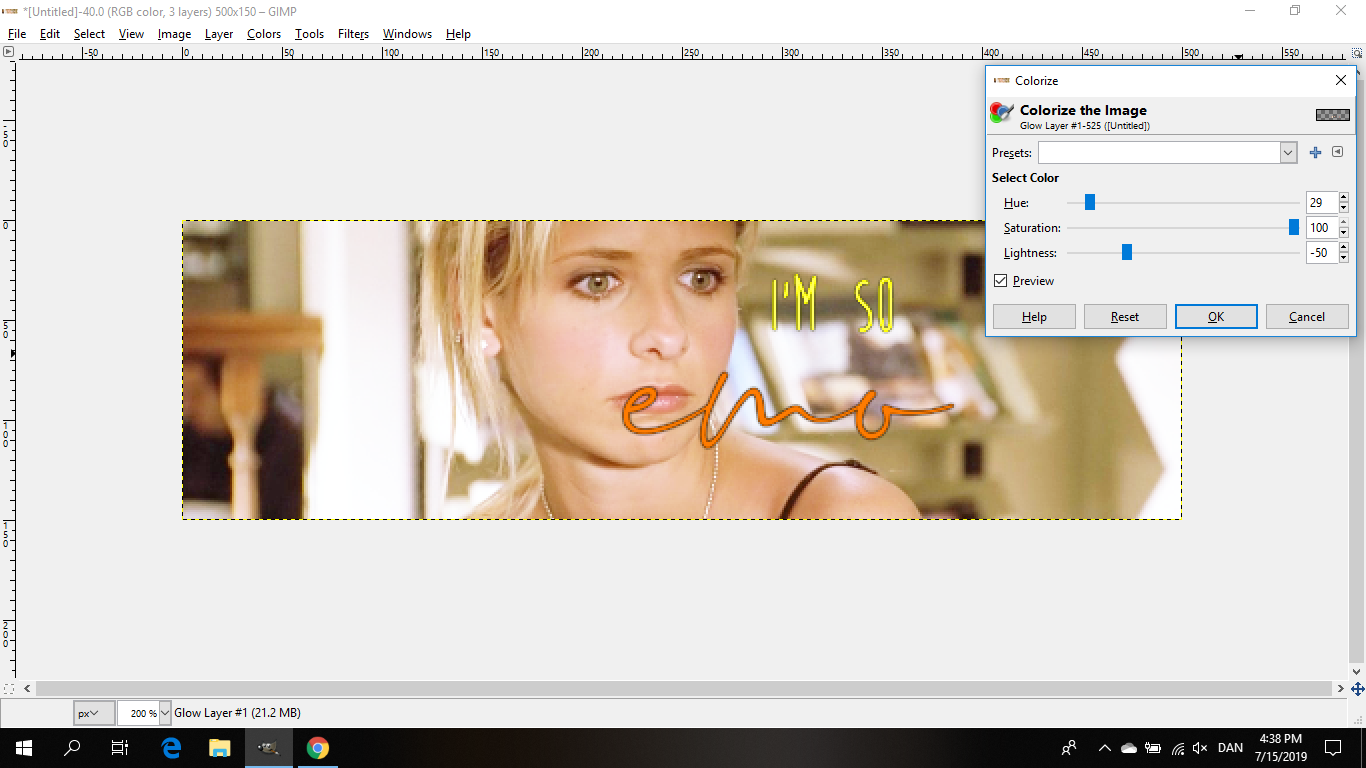 Now we add a drop shadow onto it. There are other shadow versions, but I prefer this one for text 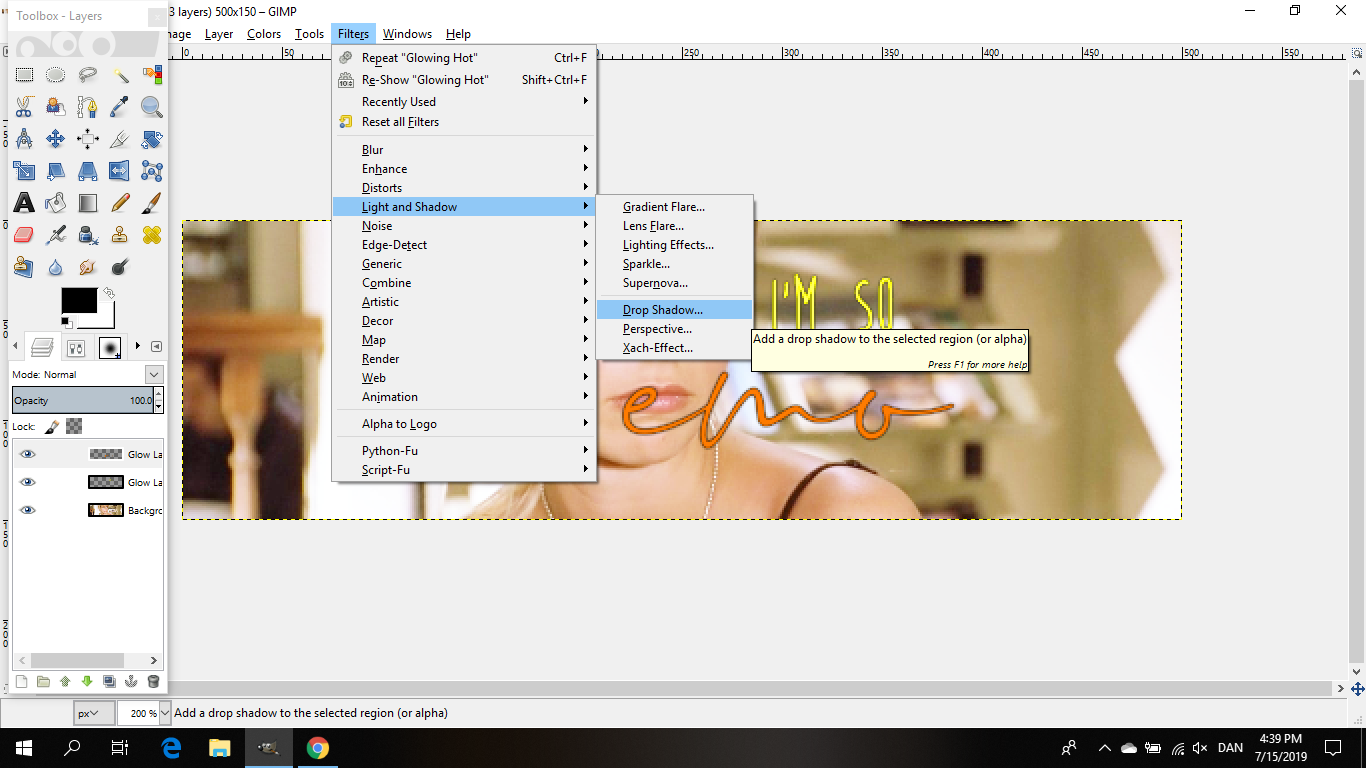 And again, you can play around with the settings, mine differ wildly depending on each banner 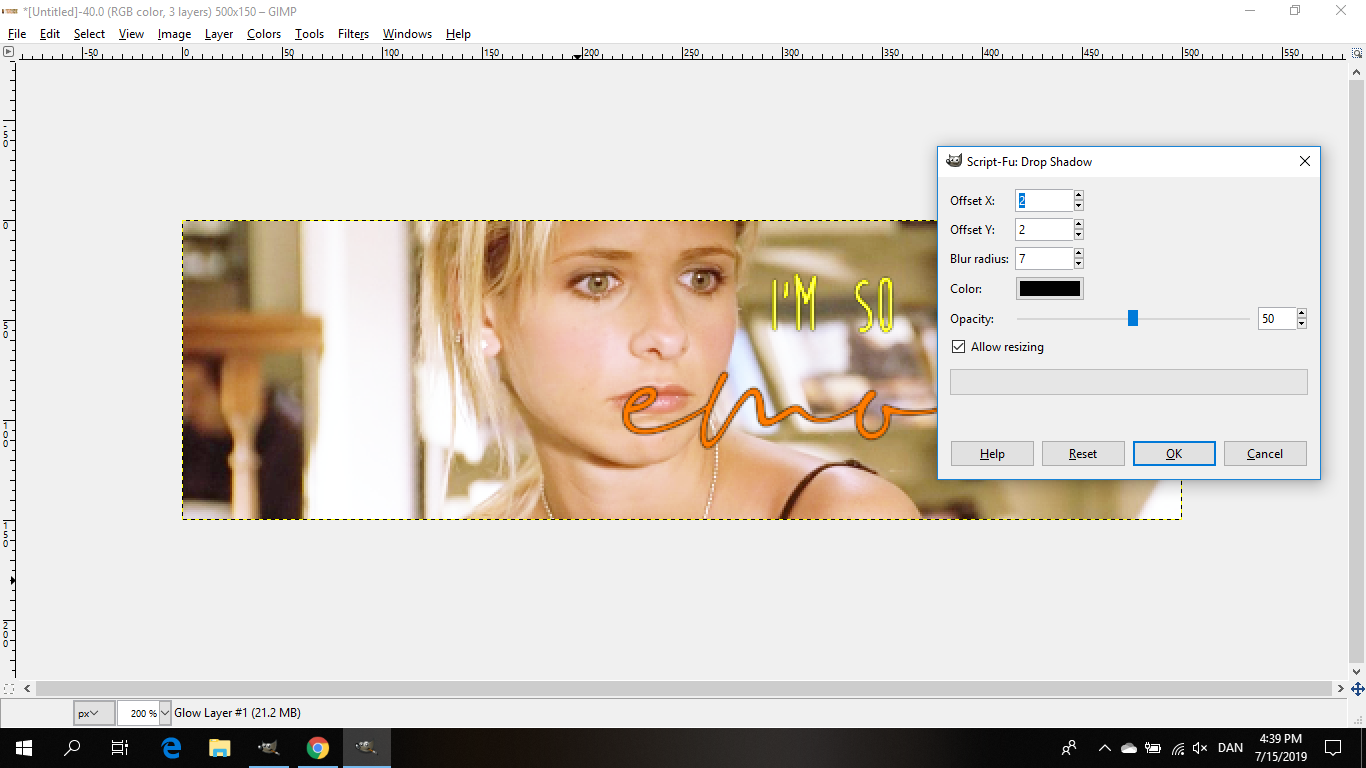 I love tons of shadow, so I usually duplicate it times 3 (using Shift F) but again that's something you can play around with 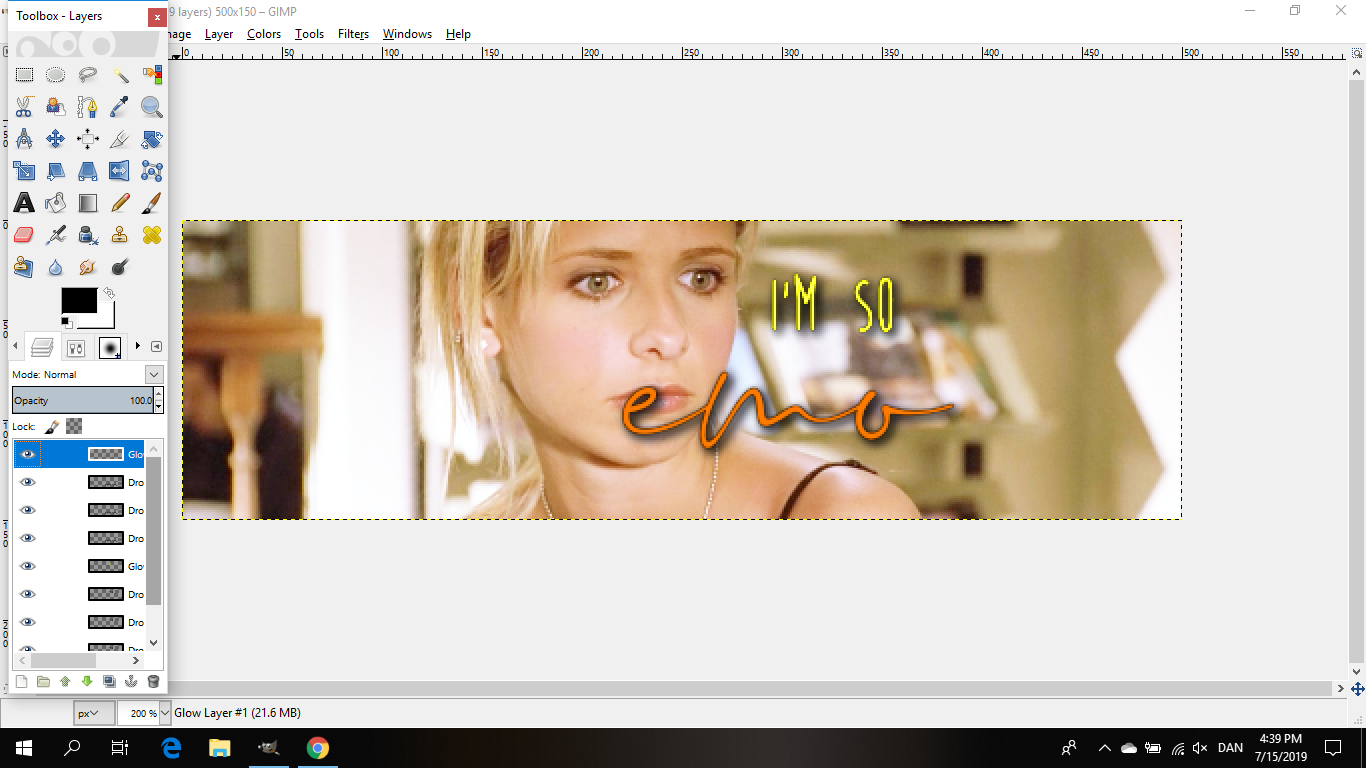 When you have the shadow you want, merge the layers, but be careful not to merge the two text layers together or an I'm so shadow on top of the emo layer. Then, you can play around with the words themselves and their placement 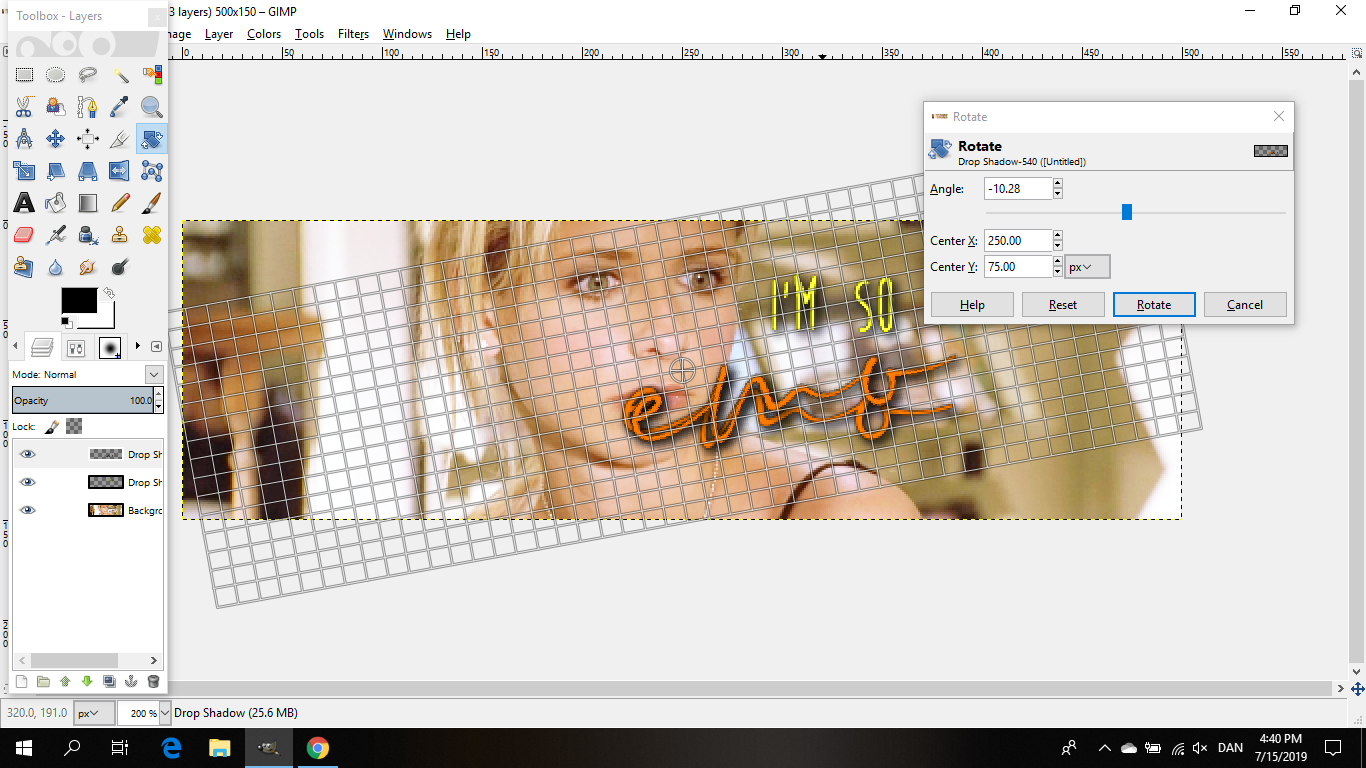 Once they are where you want them, that's it. Your text is done and adds a little something extra to your banner! 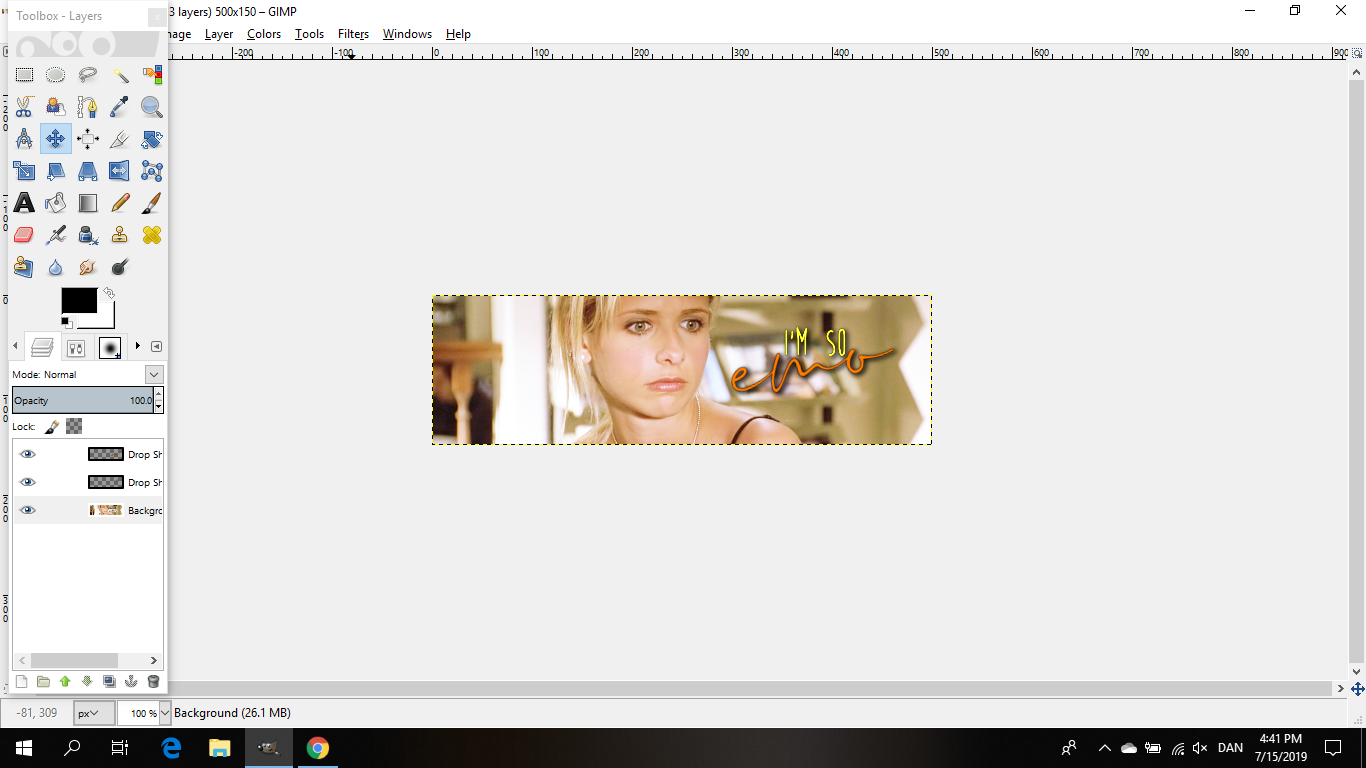 Does anyone else feel like Vanna White when making these?