Who is the most intelligent? Willow, Fred or Warren?

Willow, Fred and Warren have a high intelligence in the fields of science and technology. Who is the most intelligent between the three and what makes one more intelligent than the two others?
T

Willow was able to crack all their technological and magical inventions fast, so unless Warren and friends just came up with this stuff on their own in a couple of days then Willow outmatches them.

But neither one had much common sense.

Black Thorn
Its Fred. She's brainier than the other two, no question.

I can't judge Willow or Warren's intelligence because it was aided by magic. Whereas Fred seemed naturally gifted in science and technology.
T

For what it's worth, Willow was the one some company wanted real bad (season 2, What's My Line). Oz was there with her, not Warren...though maybe he skipped that day.

Sineya
There are many types of intelligence and lacking in one may result in failing to fulfill the potential of another with high value. Also how intelligent a person is subject to change with life events. I don't think the show tackled "intelligence" well/consistent enough for us to be talking about it.

whatdBuffyDo said:
There are many types of intelligence and lacking in one may result in failing to fulfill the potential of another with high value. Also how intelligent a person is subject to change with life events. I don't think the show tackled "intelligence" well/consistent enough for us to be talking about it.
Click to expand...

I was thinking along these lines, too. Willow was brilliant, but I'm not sure she could have built a robot without magic, though she could repair one. Warren couldn't come close to the magic Willow could do, though I think a lot of Willow's magic ability was innate talent, not from studying. Fred was a completely different kind of smarts. If I had to be alone on an island, I think I might pick Fred. She can't do magic, but she could probably create a cell phone from coconuts.

Fred's is more formalized - she has a PhD and is actively working/researching in the field. In this sense her intelligence is "rubber stamped"...authorised. Moreover, as Wes said, she's curious (though it's actually her curiosity that gets her killed). Willow and Warren are working in the shadows...there's really no-one to attest to their intelligence (which is probably why they have to prove it. Willow needs Giles to acknowledge her power; Warren has his sycophants

As @thrasherpix says...neither of them have much common sense...and they're both lacking emotional intelligence...but really it's this...


Priceless said:
I can't judge Willow or Warren's intelligence because it was aided by magic. Whereas Fred seemed naturally gifted in science and technology.
Click to expand...

It seems to me that Willow/Warren use their intelligence because something is lacking in their lives...they're kinda compensating whereas Fred seems born to it. Isn't her teddy bear named for a nuclear scientist?


Stake fodder said:
She can't do magic, but she could probably create a cell phone from coconuts.
Click to expand...

In fairness, we used to do that with a length of wire and two tin cans. 😄 It wasn't quite a cell phone but it served a similar purpose. I'm still going with Fred though. 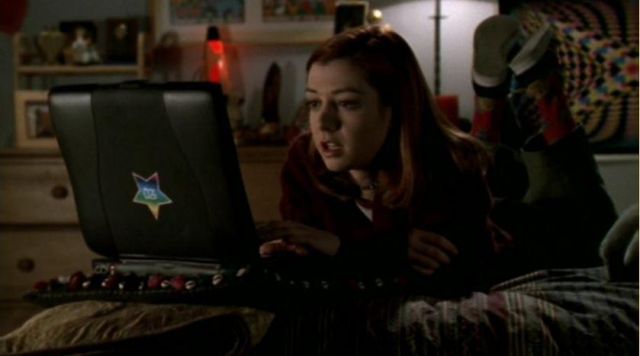 Sineya
Willow had been recruited by the same people who recruited Oz and since they said there was someone who was supposed to be there from Redmond WA, I assume they meant Microsoft. Fred had been considered brilliant enough by Professor Seidel to be dispatched to Pylea. Warren was good but robotics does not rise to the level of physics or software and no one had certified him as a major talent. But he is far above most people. I would give the advantage to Fred since she was already a presenter at a prestigious physics conference indicating that she had made an advancement in the state of knowledge. Willow had been recognized as someone who might be able to help with a problem and the only way that could happen was if she had made a suggestion to Microsoft that they wanted to try. This is not necessarily about intelligence, it is about solving a specific problem.
S

I would have picked Willow over the two others. Fred's smartness has never impressed me. Warren is a highly intelligent person but he is no Willow.

Sineya
Raw brilliance and intellect? Fred, no question. Even if she lacked common sense of occasion.

But also she had the sense to never go evil. That's a factor.
S

Changing my point of view. I concur with the factt that Fred is the smartest.
A

Either Fred or Willow. As for Warren, no. He may have been scientifically adept, but he had the social skills and emotional intelligence of a kindergarten tot.

Sineya
I think Fred, but Willow was able to use magic which could make her smarter in some peoples books. Warren I think comes last because he was a nerd who was good at science, but couldnt socialise and not much 'common sense'
You must log in or register to reply here.
Share:
Facebook Twitter Reddit Pinterest Tumblr WhatsApp Email Share Link
Top Bottom