Why did the dinosaurs die out?

Black Thorn
To all of those well informed people on Buffy Boards, who can tell me why the dinosaurs died.

And for those members who think they are funny, which one of the dinosaurs would get the wettest when it rained?

Black Thorn
The cavemen ate them all. Everyone laughed when Fred got his Brontosaurus burger, but they didn't think about the lasting ramifications.

Sineya
It is estimated that the oxygen content in the air was 30% in the era of the large dinosaurs., That is the only way large bodies could work - if a blood vessel is tens of metres long, there has to be a large oxygen content or there will be nothing left at the end of it. This was facilitated by a 5°C higher average temperature than now, a carbon dioxide content of 1100 ppm (to maintain existing temperatures, it would have to be 350 ppm and it is now about 415 ppm). Huge forests were the norm. Forest fires would be almost impossible to contain at a 30% oxygen level. The asteroid that killed the dinosaurs didn't kill them directly, it killed the forests which meant that small mammals, which are more efficient in the use of oxygen, came to the forefront.

The Jurassic Park reconstructions of dinosaurs wouldn't work for the large ones - they would be asphyxiated by the low oxygen content in modern air.

To further what others said, the climate was cooling and becoming less favorable for herds of large animals that require a lot of food. On top of that, a large meteorite (est. 10 km across) hit that likely threw dust up into the air for several years, cooling the Earth further. It is believed that the meteorite hit off the coast of Mexico, where you can still see a large curve, the edge of the crater, where the Yucatan peninsula is.

Black Thorn
There are some well thought out notions, sort of, but did no one consider there size was a factor in why most of them died out?

My thanks to Spanky for his guess about which dinosaur got the wettest when it rained.

Black Thorn
So why did the dinosaurs die out? I thought it was an obvious reason - they were to big to get on the ark.

As for which dinosaur got the wettest whenever it rained - the T.Rex - its front arms were to short to hold the umbrella above its head.

Hugh meteorite , plenty of crap into the air blocking out the sun for years , only small mammals survived

Sineya
They run out of baileys!

Black Thorn
They got eaten 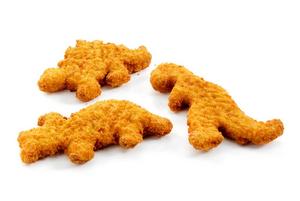 ILLYRIAN
Its a be nice to @Nix day, Dino's are Bailey's flavoured chunks of guess what? Yup you guessed it, Chicken!

Buffy Summers
Those are the best! I have some in my freezer :D

Sineya
What do you mean? They didn't die out! They are all at Jurassic Park on Isla Nubla... all with little umbrellas to protect the tall ones from the rain

One recent theory is that it was multiple factors (volcanic activity finished by meteor). Also that they may have been on the decline already.
Not sure about the oxygen level thing. From what I googled it seemed kind of mixed. One report seemed like oxygen levers stayed high till much later.
Which some argue is the reason for all the pleistocene megafauna, and the more recent lower oxygen levels helped in their extinction

Black Thorn
@HowiMetdaSlayer, I didn't think of that!
The loading point of the Ark was from the top of a mountain - Dinosaurs couldn't climb up a mountain, or the Unicorns apparently.

ILLYRIAN said:
As for which dinosaur got the wettest whenever it rained - the T.Rex - its front arms were to short to hold the umbrella above its head.
Click to expand...

My vote for wettest would be the apatosaurus or brontosaurus. They were much bigger and longer than the T. Rex, therefore more area to get wet! But then, there were ocean-living dinosaurs the same size or bigger, so they would be wet all the time.