Someone on another site asked me to write a tutorial for my Spike/Buffy fairytale wallpaper. I’ve finally got around to it and didn’t think it’d hurt to post it here, too.

It’s a deceptively simple wallpaper, I think. Once you’re past the initial image prep there’s very little blending and most of the colouring comes from simple flood-fill layers and a couple of textures.

Warnings/Notes
1. I don’t use Photoshop or GIMP as most people around here do. I use Corel Paint Shop Pro X2 – but I think most of the features are the same across the programs, so there shouldn’t be anything too unfamiliar in what I talk about.

2. If I can take the easy way out, I will. If I can get away with not blending something properly, or hiding something with a texture… I will. Call this laziness if you like, but… why make things difficult for yourself?

3. I do a lot of copy merging, then pasting the result as a new layer. I honestly don’t know if other programs have this feature, or something similar, but it gives you a flattened image without actually having to flatten the entire piece: useful in case you want to go back and change something later. So: when I say 'copy merge' in the tutorial, I mean the entire canvas, which is then pasted as a new layer.

4. Click to see any of the images in fullsize.

Image Prep
There’s not too much image prep to be done for this piece – it’s mainly cutting out Spike and Buffy from their backgrounds. Everyone has a preferred way of doing this. I like to use my program’s Edge Seeker tool, which allows me to cut around the objects with some precision. I then use the eraser brush to smooth out the edges. Go with whichever way you find easiest, but in the end we need to start out with our Spike and Buffy images hard-cut from their backgrounds.

1. Open a blank canvas. I prefer to make wallpapers at 1280x800, as this is the size of my own screen resolution. Flood fill the canvas with [HASHTAG]#9bad8d[/HASHTAG], a pale green colour.

2. Take the tree stock image and paste it as a new layer into the right hand side of the canvas. Set the layer’s blend mode to Darken, and erase the hard edges with a large, soft brush.

3. Paste the castle stock as a new layer and position it to the left of the canvas. Set the blend mode to Darken and again, erase away any hard edges. I haven’t had to remove the bottom part of the image because it will be covered up later. There's that laziness I was talking about...

4. Paste in the Buffy image you prepared earlier (I feel like a Blue Peter presenter!). I wanted it to look like she was sitting slightly behind the tree, so erased part of her body away to achieve this. I then added the wings and moved them in behind Buffy.

5. Spike’s next: paste him in as a new layer and position him to your liking. His wings are next and again, put them in behind his body.

6. So far so good, but it’s looking a little messy with all the hard edges and uneven blending. Take the easy way out: something doesn’t look quite right? Slap on a texture to cover it up. Take the texture by vikyvampirs90 and paste it on as a new layer. I inverted the colours by making it a negative of itself (Image>>Negative Image) and set the blend mode to Lighten.

8. Time for some colouring! There’s no rhyme or reason to my colouring techniques. I mess around until I find something that looks good – I have no set plan in my mind when I begin.

It’s starting to come together!

10. I want to smooth things out a little, so we need to copy merge and paste again, then apply a blur to the layer. My program has a ‘One Step Noise Removal’ feature that I’m quite fond of – not sure what the Photoshop or GIMP equivalent is, sorry. However I don’t think this step is essential, it just gives the piece a smoother quality.

12. Copy merge and paste as a new layer. Invert (negative image) the layer and set to Overlay at 58% opacity. Everything looks a little dull and dark at the moment, so we’re going to copy merge/paste again and set the layer to Screen at 28% opacity.

13. It’s still a little dark, and everything looks a little bit too flat, so we’re going to put in a Brightness/Contrast adjustment layer. Play around with the settings until it looks right. 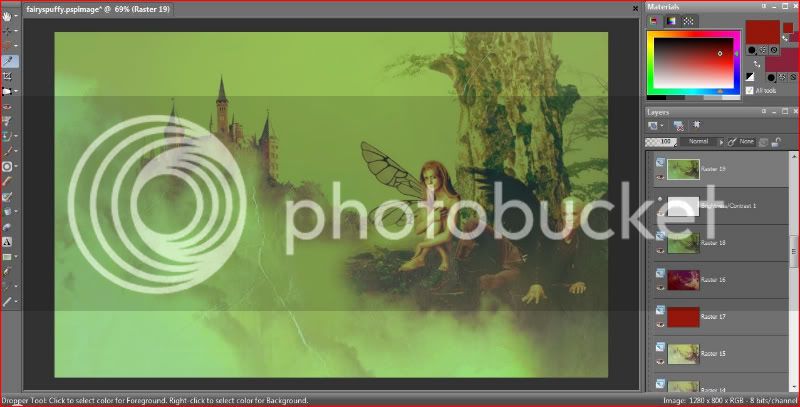 14. We’re almost there! Copy merge/paste and sharpen once. I’ve set this layer to Normal at 40% opacity, so that it doesn’t look over-sharpened.

16. At this point I added in another Brightness/Contrast adjustment layer, again to add in a little more depth to the image.

17. The final step is the text, and I’m sure I don’t have to explain how to do that.

I hope that wasn’t too hard to follow! I’m at a bit of a disadvantage in that my program more than likely differs to everyone else’s, and that I’m not sure if other programs have the exact same features. Ask if you have any questions, and I'll try to answer them, LOL!

I’d be very interested to see if anyone attempts this and your results if you do - if only to see how difficult/easy this was to follow along with.

However: please don’t recreate the wallpaper and then claim it as your own. I don’t mind if you post it and credit me or the tutorial, but I wouldn’t like it if you remade it with no credit. You could even change the characters used; for example, I think this image of CC would lend itself well to the theme of this piece.

I quite like writing tutorials… so if anyone has seen any of my art and wants to know how I got there let me know and I’d be happy to jot something down.

Sineya
I think I'll try this out later

In terms of some other tutorials you could do I would love for you to do something on your colouring. I really love what you do in that respect. You have a distinct style and I can always tell a Xaph piece from the colouring alone.
Z
zobothehobo
This

Great tutorial! I didn't try it, but I could tell I could follow. I have Corel, but I don't use it much.


Kean said:
I think I'll try this out later

In terms of some other tutorials you could do I would love for you to do something on your colouring. I really love what you do in that respect. You have a distinct style and I can always tell a Xaph piece from the colouring alone.
Click to expand...

Kean
never said I'd follow it to the tee :p

Sineya
Wow, thanks Amy!!! That wallpaper is amazing, and I wondered what techniques you used to get to the finished product. Thanks for sharing!
X

Kean said:
I think I'll try this out later

In terms of some other tutorials you could do I would love for you to do something on your colouring. I really love what you do in that respect. You have a distinct style and I can always tell a Xaph piece from the colouring alone.
Click to expand...

Thanks! As for colouring... well, I just experiment until I find something I like.

However there are a couple of things I do to pretty much every piece I work on (though sometimes these things just don't work.)

In addition to this I like to use bright red flood fill layers (#b90000) on either Exclusion or Lighten.

I 'flatten' the colours a lot of the time by adding a Darken Invert layer (on my program it's under Layers>>New Adjustment Layer>> Invert).

The other one I like to use, though it doesn't always work, is a blue (#9db6e4) on Multiply or Burn.

Whilst I do generally use one or more of these colours almost everytime I make something, there's no set pattern to my colouring. I really do just play around until I find something I like the look of, and occasionally I'll do something by accident.

If there's a particular piece that you like the colouring of I can write out a tutorial for it.


Chosen Enemy said:
Great tutorial! I didn't try it, but I could tell I could follow. I have Corel, but I don't use it much.
Click to expand...

HisMrs said:
Wow, thanks Amy!!! That wallpaper is amazing, and I wondered what techniques you used to get to the finished product. Thanks for sharing!
Click to expand...

Sineya
That piece is really lovely!

And thanks for the step by step and insight into how you do things. I am just learning how to do this computer art stuff and it's complicated enough to make me reminisce about calculus sometimes.