I dont think I'm okay with the Buffy Reboot.

I like the comics thus far (I’m not that far into them). Didn’t realize they weren’t exactly seen favorably by the fanbase.

At any rate I do see the Dark Horse comics as the “true” Buffy continuation, and would much rather have a spinoff of sorts about a new slayer. I definitely don’t want to see a new actor portraying Buffy, as I feel it’d be attempting to erase what’s already been done... Dunno, maybe I’m just way too attached to the original Buffyverse and its cast

This reboot is so not happening
K

I don't know why people think they'd fail or have nothing to offer - Star Trek - TNG and DS9 worked - which proves same verse, different characters can work. The Dr Who revival worked (at least for a time) - man I was sceptical about that one at first.

Black Thorn
The reboot will definitely happen - the question is when. It could be 20 or more years from now, but it'll definitely come someday. When it does (if I'm still alive ) I'll watch it for sure, even if it's just to see the mess they might make of it. Nothing will ever take away from the legacy of the original show, no matter how bad or good the reboot may end up being.

If there's going to be any sort of continuance of the Buffyverse, I would much prefer going the toutr that Gene Roddenberry did with his "Star Trek" franchise in its TV universe Skip the movies, and go straight to the "Next Generation" series, even if it has to be shuffled forward into the 2060's (the lack advances in science and technology could be explained any of several ways, from global disaster to manipulation by the "old ones," who have decided that man should not be allowed to advance any further at this time) with occasional reference to the original show, but let it stand on its own merit, win, lose, or draw. Keep the original cast and characters safely in the past, forever the young, vibrant, heroic figures that we all know and love.

Better yet, just do a series loosely based on the "Fray" story line.

katmobile said:
I don't know why people think they'd fail or have nothing to offer - Star Trek - TNG and DS9 worked - which proves same verse, different characters can work. The Dr Who revival worked (at least for a time) - man I was sceptical about that one at first.
Click to expand...

Fair point, but Star Trek still had higher demand. The Films were still being made, and then hit their nadir with ST IV. Reruns of Trek were still on every UHF station in the country. (Good Times), and the creators and fans were, to some degree, still around and interested. The only people who seemed interested in a Buffy reboot are the Movie Producers.
R

I think an Animated show could still be really good, as long as it was different from that teaser they released.

To be fair, Joss is top tier talent, who has an eye for creating and developing top tier talent. The guys who write and draw the comics? Not so much. Buffy was great, because Joss is great. You get someone like him, you’ll get a good series. The problem is, the guys like him write for Marvel and DC. (Literally, he’s one of the best Comic Book writers of the 21st Century for his work in X-Men.)

Give Us A Kiss

Sineya
Honestly, now I would have no problem with a Buffy reboot, I'd prefer that over a pandemic.

A Buffy reboot doesn’t bother me. It could be great. I’ve enjoyed reboots such as TMNT 2003 and Ducktales 2017. Doesn’t look like it is going to happen at the moment anyway.

I was pretty much against it when it was first announced, but I'm reading the Boom! comics and they are certainly not about my Buffy, so I could watch another Slayer show as long as it was interesting and well written with good performances.

What's the story on the reboot, are they still planning to go ahead with it anytime soon?

It seems like its been mooted and in the works/talked about forever!

Sineya
Is any new studio production of any kind going on these days? There are stay at home orders for all but essential workers and I doubt anyone thinks Hollywood is essential. Even if the filming is out of state, quarantine orders will come down soon everywhere. You can write the screenplay in isolation but there has not even been an announcement of someone tasked with writing the scripts.

Joan the Vampire Slayer
I was wondering this myself.

Sineya
The ONLY way I'd be ok with a continuation of the Buffy I know and love would be if if they picked up the storyline where we left off after "Chosen". Dismissing most of the craziness that happened in the comics, I feel like this would be the best option to give the fans what they want. If the pick up where they left off, they could create a show that focuses on a newly called Slayer, and still have the option to bring in our beloved characters from time to time. Guest appearances from the original cast wouldn't have to happen often, but it would be cool to see Willow popping in to check up on the new Slayer, or Faith or Buffy showing up to help out in a particularly hairy situation.

Has there been any news on this lately? I've seen nothing.

HisMrs said:
The ONLY way I'd be ok with a continuation of the Buffy I know and love would be if if they picked up the storyline where we left off after "Chosen". Dismissing most of the craziness that happened in the comics, I feel like this would be the best option to give the fans what they want. If the pick up where they left off, they could create a show that focuses on a newly called Slayer, and still have the option to bring in our beloved characters from time to time. Guest appearances from the original cast wouldn't have to happen often, but it would be cool to see Willow popping in to check up on the new Slayer, or Faith or Buffy showing up to help out in a particularly hairy situation.
Click to expand...

I think the main problem with a Buffy reboot is that the Buffy fandom is still going strong and are wary about a reboot. When they first announced it, the reception was so lukewarm to the point that the person heading it felt the need to come out and clarify that they weren't recasting the beloved characters from the original. The other thing is that this reboot feels like an attempt to wokeify a show that more or less still stands up today. It's unnecessary. The basic premise is "Let's remake a show that doesn't need remaking but this time let's make Buffy black!"

Reminds me of this quote from the movie Seven Psychopaths:

If this reboot were to go ahead, their best bet would be to make the new black Buffy the daughter of Anne.

A) It gives a reason for the black Buffy to be called Buffy other than just title recognition. The original Buffy saved Anne's life twice, first from Spike in Lie to me, then from Ken in Anne. Naming her daughter after the original buffy would be a way for Anne to acknowledge Buffy saving her.

B) You can tick the interracial relationship box because Anne is white whilst her daughter is not (she'd be mixed-race) hence the father was black. They could make the father Gunn which also ties to the Angel show as well. Two birds, one stone.

C) Anne would not be in contact with the scoobies or Angel's team (maybe Gunn is dead?) therefore they can't be called upon to help deal with the inevitable apocalypses that the new Buffy will have to face.

D) Anne herself would the connection back to the original show. She'd also have reason for wanting to protect her daughter from the things in the dark whilst new Buffy would feel like it's her duty to face them. This creates conflict between the two. You could also set up a situation where new Buffy doesn't realise her mother knows more about the supernatural than she lets on. This also presents an opportunity to use archive clips from the original show particularly this scene: 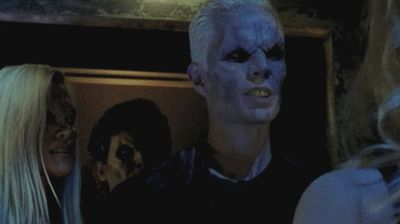 thrasherpix
I'd be excited by this premise

There is no current status. It’s been about over a year, and not a single piece of news has come out about the project. The Producers, whomever they might be at this point, has more important things to worry about, and Boom!, along with the entire American Comics industry is on Death’s door. If I had to guess, the next piece of news we’ll get is Joss doing an interview for another project, like “Nevers,” and someone will ask him about Buffy, he'll get a cryptic answer, and we will have to figure out what his answer means?

Sineya
Back when I was an electronics designer, we used to get vapourware announcements from integrated circuit manufacturers all the time that were just like this. The announcement was not made to indicate a product would be forthcoming, it was made to gauge interest in whether they should bother to undertake it. God help any designer who used a vapourware product in a design only to find out it was never going to exist. The announcement of a new Buffy was made to determine if any producers were interested. So far, no one has given them the "I gotta have it!" reaction they were looking for, so requiescat in pacem new Buffy, you are dead.

I agree, it's probably dead. 1. Buffy's basic formula has been successfully cloned for years, "Smallville," "Vampire Diaries," "Supernatural" and "Twilight" all owe a Deep Debt to Buffy, and were arguably as or more successful. Second, Buffy's IP is fairly messy. Why pay off the Kuzuis, Dolly Parton, Joss and Fox/Disney, when you can just buy some YA Story about a Magic Girl outright? You can keep all the money for yourself. Three, reviving old IPs is no longer a sure fire hit. 3-G Star Trek is still working out the bugs. Sequel Series Star Wars is broken and may bring down Disney. Doctor Who is being given last rites. The issue is, Buffy is only worth something to one man. So, never say never, but I think it will be swept away in the Post COVID19 Disney reorganization.